When President Yoweri Museveni from Uganda stood up and announced that the country’s biggest problem was unemployment and that artisanal mining should be stopped, Richard Poulden, CEO of Wishbone Gold, saw an opportunity that was too good to miss 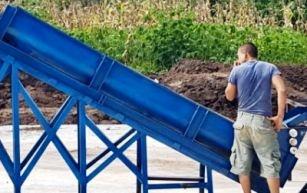 “I spoke to the president and said you shouldn’t be stopping the miners but licensing them, regulating them and bringing them into the fold that will create employment,” said Poulden.

Immediately impressed, the president asked him to present Wishbone Gold’s unique mining model and the rest, they say, is history. That exchange happened in October 2017 and five months later, Wishbone Gold has a team on the ground exploring potential sites in Uganda where there are artisanal and small-scale miners.

“They will probably be unlicensed miners but we will change that and give them legal licenses,” continued Poulden. “Our conditions will be: no mercury, no slash and burn, no destruction of the environment, and most importantly, they will have to pay taxes. However, they will be making a lot more money than before, so, if I was an artisanal miner I’d think that it is a good idea.

Despite the bad press, not all artisanal miners are criminals – some are licensed and don’t use child labour – the latter being the exception rather than the rule. “Once we have decided which sites in Uganda to work with, hopefully, we will have some output by the middle of the year. We are the only company in London that gives exposure to exploration and trading and reverse integration in artisanal mining.”

Wishbone Gold hopes to strengthen its position by implementing its model to support artisanal and small scale mines across Africa, which are estimated to directly employ more than eight million people and produce five per cent of all global gold. It already has operations in Mali and Uganda, and hopesother countries will follow suit.

“There is a lot of gold coming from small mines. They are chasing a vein, either working on alluvial gold from a river bank or river bed. The equipment we are putting in is simple to use. The miners like it because we are increasing the throughput by up to five to six times, in some places it might be much more. So the quantum of money that the miners receive is much bigger.

And from the government’s point of view, they are getting their taxes paid and critically, they can include the numbers in their GDP. Currently, if gold is being smuggled illegally and no taxes are being paid, the governments don’t know what the potential figure could be for their economy. If they can start to include this number in their annual GDP figure and it goes up, the World Bank and IMF will be happy and more willing to help countries that need to borrow money. It also means that their economy is performing better and it is something that can make a fundamental change in the running of the country.”

Wishbone originally set up its unique operation in Honduras, Central America. “Our vision is that we don’t want to own mines. We just want mines to commit to a long-term supply contract,” explained Poulden.

In Honduras, they have agreed to 10-year contracts with some mine owners and are currently talking to those that have licensed mines, but are not up and running yet. Wishbone Gold’s role in countries such as Uganda and Mali will be providing training for miners on how to use the mining equipment.

“We’re not just giving people equipment and keeping our fingers crossed. We have people in each country, running the operation,” he said.

In return for providing investment, managerial support, equipment and staff training, Wishbone receives the output of gold from the artisan mines. Once purified, the gold will then be sold through Dubai via Wishbone Gold to the steadily increasing market in India and China.

Poulden said, “At Wishbone Gold, we are aiming to reinvigorate artisanal mining. In places where they have decided that the solution is to stop it altogether, we believe that’s not the way to do things, you are suppressing the employment where there are legal licensed miners. Why would you stop them?

“Unemployment is a big issue in all African countries, and our model provides simple employment. It is very straightforward to train people to use this machinery, and enables them to educate their children and plan for the future.”