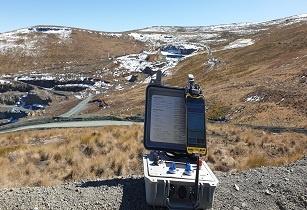 AXXIS Silver model allows up to 1,800 holes to be detonated in a single blast. (Image Source: BME)

BME, a member company of the JSE-listed Omnia Group, is assisting a diamond mining customer to conduct quality blasts in all weather. Located at an altitude of over 3,000 m, the operation frequently experiences snow and sub-zero temperatures.

“This means blasting under challenging conditions, including extreme cold, snow and ice. BME provides everything from the emulsion explosive to the detonation equipment, which all continues to function well under these conditions,” said Hennie du Preez, BME’s AXXIS support manager.

“Among the benefits of AXXIS Silver is its thin, copper-cladded downline wire, which de-coils easily for use in small diameter holes – even when they are waterlogged. Due to their robust quality, our electronic detonators were able to remain in the holes for two days before blasting, in temperatures below zero where the hole-collars froze solid,” Preez said.

Despite the conditions, there were no issues encountered with the wire or the connector. BME’s latest logger, the TDC 600, also performed as normal in these conditions, with no signs of screen lagging. Its battery lasted the entire duration of the logging and the firing of the blast.

“We have had AXXIS successfully tested in the US for operating in temperatures below minus 40 degrees, in anticipation of growing business opportunities in the US and Canada,” Preeze commented.

AXXIS Silver allows up to 1,800 holes to be detonated in a single blast, initiated from two blast boxes linked. BME is expecting to apply AXXIS Titanium in the Lesotho operation, which can raise the number of detonations in a single blast to 20,000 – or 20 box blasts firing up to 1,000 detonations each.

BME has also been supplying various Lesotho mines with up to 500 tonnes of emulsion explosive each month, as the mining operation has expanded over time.