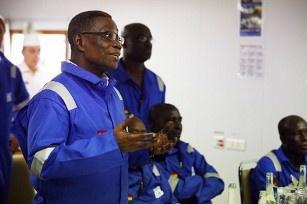 Appraisal work has been completed on the Tweneboa field, which lies just west of Jubilee – where production is building up fast.

Tullow, the operator for the licence covering Tweneboa, said the last scheduled appraisal well, Tweneboa-4, found a net 18 metres of gas-condensate zones. Tweneboa-4 was drilled 3.9 kilometres southwest of an earlier appraisal well and Tullow says the two wells are in pressure-communication, indicating a large structure. The latest well was drilled in 1,436m of water by the Deepwater Millennium drillship.

Meanwhile, US firm Kosmos made a discovery with its Teak-2 well, drilled less than five kilometres northeast of Jubilee. Although Teak-2 was drilled 1.8km from the earlier Teak-1 discovery, the two are not though to be connected – so both have considerable upside potential with further drilling.

Teak-2 found a net 27 metres of oil, condensate and gas zones in stacked reservoirs, while Teak-1 found five reservoir zones. Teak-2, drilled in 885 metres of water by the Atwood Hunter semi-submersible, was suspended for further work. In April, the Atwood Hunter was being moved to drill an exploration well in the Banda prospect, east of Jubilee.