China General Nuclear Power Holding Corp (CGNPC) has begun mining for uranium at the Husab mine, near Swakopmund in western-central Namibia 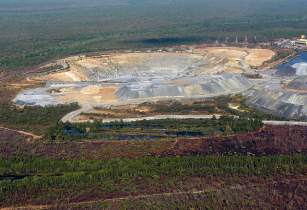 CGNPC has invested a little more than US$2bn into the Husab uranium mine, making it China’s largest investment in Namibia thus far. When fully operational, the mine has potential to produce 15mn pounds of uranium oxide, stated officials from CGNPC. The China-based company assumed ownership of the Husab mine after taking control of Kalahari Minerals and Extract Resources, stated Reuters.

Percy McCallum, spokesperson, CGNPC Namibia, said, “We have been clearing the overburden of sand and will start mining ore from May 2015 onwards. We hope to have stockpiled one million tonnes of ore by December 2015.”

Uranium from mining is used almost entirely as fuel for nuclear power plants. Uranium exploration officially began in 1960s in Namibia with Rio Tinto obtaining exploration rights for the Rössing deposit in 1966. The Rössing Uranium Mine is the longest-running and one of the largest open-pit uranium mines in the world, located in the Namib Desert near the town of Arandis.

In 2011, Namibia was ranked as the fourth largest producer of uranium worldwide, following Kazakhstan, Canada, and Australia. However, when the price of uranium dropped after the Fukushima incident in Japan, production from the southern African nation reduced. In 2012, it produced 7.1 per cent of uranium oxide, trailing behind Niger.