Strong demand for gold, lithium and a host of other commodities means interest in West Africa’s mining sector and its potential have never been stronger 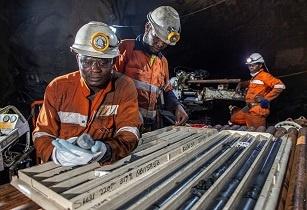 Workers at the Obuasi gold mine in Ghana. (Image source: AngloGold Ashanti)

West Africa has long been one of the continent’s mining hot spots and remains an important source of gold, iron ore, bauxite, uranium and diamonds. That means it has attracted huge foreign investment over many years – and it continues to do so, presenting with it opportunity for leading equipment suppliers, contractors and consultants.

Strong commodity prices have been good to the sector, which has helped to fuel more investment in recent times, though the economic headwinds ahead are considerable. That’s a point noted by Rio Tinto in a July investor update, which stated that the waning global outlook and threat of recession had dampened prices for some of its key exports, including copper, iron ore and aluminium.

Though it is not active in West Africa, other mining companies, large and small, are facing up to the same economic realities. One of the largest is AngloGold Ashanti, which is active in Ghana, Guinea and the Democratic Republic of Congo (DRC), among other territories. At its established Obuasi gold mine in Ghana, the company is in the midst of stepping up production via a phased development programme.

What’s apparent is that investments are still rolling in even in the face of economic uncertainty – especially in commodities such as gold, long seen as a safe haven during times of crisis.

Read the full report in the August issue of Africa Review here.