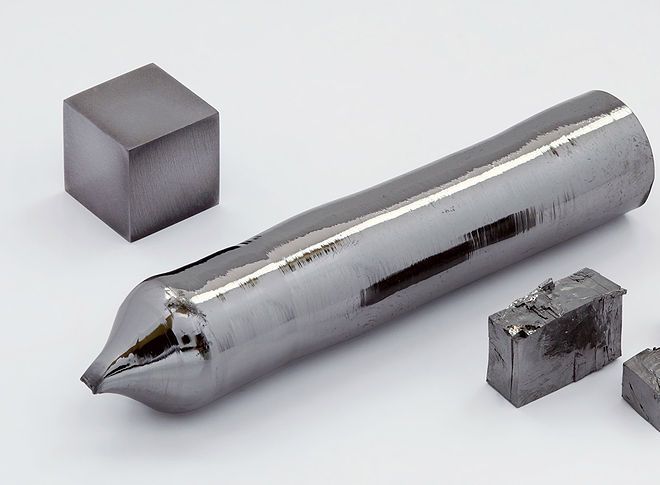 AVX, a worldwide manufacturer and supplier of electronic components, shipped the capacitors to US communications and electronics company, Motorola Solutions, in April.

The arrangement was made possible by the commitment of both companies to Solutions for Hope (SfH), an initiative that set up to ensure that DRC become a reliable and sustainable source of conflict-free tantalum.

Tantalum is a rare, hard, blue-grey, lustrous transition metal that is highly corrosion resistant. It is part of the refractory metals group, which are widely used as minor component in alloys.

The chemical inertness of tantalum makes it a valuable substance for laboratory equipment and a good substitute for platinum, but its main use today is in tantalum capacitors in electronic equipment such as mobile phones, DVD players, video game systems and computers.

Tantalum, always together with the chemically similar niobium, occurs in the minerals tantalite, columbite and coltan (a mix of columbite and tantalite).

Concerns about the proceeds generated by DRC tantalum being channelled to armed conflict groups resulted in a number of unintended consequences. Companies responded by implementing self-imposed bans on tantalum from the region, which caused massive job losses for the Congolese whose lives were supported by the industry.

A large resource was also left unused as consumers bore the brunt of rapidly-escalating tantalum prices.

In July 2011 Motorola Solution launched the Solutions for Hope Project as a pilot initiative to source conflict-free tantalum from DRC and AVX announced that it would be a partner.

To ensure that supplies remain conflict-free from mine to finished product, a pipeline was established whereby tantalum is obtained from specific mining concessions in North Katanga. The rights to that land are owned by Mining Mineral Resources (MMR).

A mining co-operative called Cooperative Des Artisanaux Miniers du Congo (CDMC), has been contracted to manage the artisanal miners at the site.

In a semi-mechanised operation, MMR removes the overburden (waste) and artisanal miners remove the underlying tantalum, which is collected, weighed, and logged. This process is widely referred to throughout the industry as a ‘bag and tag scheme'.

The tantalum is then transported to a depot in Kalemie, DRC where AVX pays the market price for it and exports the ore to Johannesburg in South Africa.

From there, the tantalum goes to China’s F&X Electro-Materials, a certified smelter.

It is then converted into wire or powder and then shipped to AVX’s facility in the Czech Republic where capacitors are made.

After manufacturing the capacitors, AVX sends out the conflict-free tantalum products to partners. For the first pilot run, the partner was Motorola Solutions.

A document said to be from an independent audit conducted by Gregory Mthembu-Salter, a consultant to the United Nations Group of Experts, confirmed that mineral output from the two mines in the pilot was conflict-free according to Organisation for Economic Co-operation and Development (OECD) guidelines, though certain risks and areas for improvement were highlighted.

Samples of tantalum are reportedly taken along the pipeline, including at the mine, depot, warehouse, and smelter.

Bill Millman, technical and quality director of AVX’s tantalum division, said that until SfH is fully integrated into its supply chain, every capacitor with DRC ore will be marked with its own traceable ID.

US-based Kemet, another manufacturer of tantalum capacitors, also has a conflict-free tantalum production project underway in the DRC.

The company has secured a long-term supply agreement with a mine in Katanga, which has never been a conflict area, said Dan Perisco, Kemet’s vice president of strategic management and business development.

However, as a precautionary measure, there is a police presence at the site. The site is also semi-mechanised and relies upon artisanal miners.

In February, Kemet announced the completion of its deal to acquire Niotan, a tantalum powder manufacturer.

"We now have a smelter. We have the ability to produce capacitors," said Perisco. "So we have a closed pipeline and we put a whole community back to work."

Projects to bring conflict-free tantalum back to the market have been highly anticipated by some while widely criticised by others. Millman says traders in the DRC have a grudge against the scheme.

"The traders’ business is their contacts, their knowledge of the mines, and their ability to connect the dots between the processor and the miner, so they don’t want transparency and they do not contribute to the closed pipeline," he said.

According to some industry analysts, non-DRC and non-African mines seem to believe that all the new safeguards against conflict minerals do not work.

They maintain that supply out of the DRC will affect pricing, and certain companies have worked very hard over the last few years to paint a negative picture of all material out of Africa, except that in Mozambique.

As DRC tantalum supply diminished, the void was filled by suppliers in other regions. Three major mines closed during the global economic crisis and supply was believed to be tight.

An economic recovery also appeared to be emerging, so users who had been destocking were eager to get their hands on the conflict-free supply. In these conditions, prices escalated, rising from about US$45 to $150/lb.

It appears that end users will welcome supply from the DRC, however. In addition to Motorola Solutions, other internationally recognised companies such as Hewlett Packard (HP), Intel, and Nokia have become partners in SfH.

According to Millman, the historic price volatility and controversy over conflict minerals has led some users to substitute other materials for tantalum. He described the cyclical nature of the industry, saying that the price of tantalum goes up and then comes down and added that the cycle typically takes 18 to 24 months.

According to Perisco, the high prices seen during this uptrend are simply not sustainable for many end users, including capacitor manufacturers.

"We believe long term the sustainable price is somewhere between US$60 to 80/lb," he said. "We believe [the project in the DRC] will eliminate a lot of the volatility and speculation out of the market."

Some may raise concerns that efforts to bring prices down may hurt artisanal miners in the DRC, but Perisco does not foresee this happening.

"When prices went from $45 to $150, the artisanal miners made no more money. It all went further down the supply chain," he said.

The fact that some users have become frustrated by market conditions and have abandoned the market, and that capacitor manufacturers have taken it upon themselves to forge direct relationships in the DRC, should serve as a call for tantalum producers to carefully consider their pricing policies.

The fact that capacitor manufacturers are leading the efforts to revive the DRC tantalum industry may also highlight opportunities for miners willing to assess that region. The DRC is considered one of the world’s largest sources of tantalum.

Perisco said that as far as he is aware, no one even knows for sure how much is there. But he added that the tantalum found so far has been high grade and easy to mine.