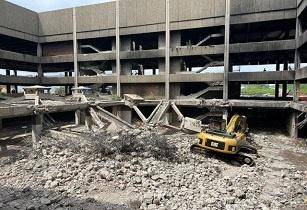 Everything is ready for the planned implosion of the Kaserne building in Johannesburg on 1 May, according to the City of Johannesburg (CoJ) Metropolitan Municipality Department of Housing

The implosion of the building, which was condemned last year following structural damage after a fire, will be undertaken by Phoenecian Group, appointed by Johannesburg Social Housing Company (JOSCHO), an entity of the CoJ.

Phoenecian is working under Mbongiseni General Services to not only implode the five-storey building, but also prepare the site for its proposed redevelopment.

The implosion will make way for a new Vertical Mixed Use (VMU) housing development that will accommodate 2,000 households as part of the larger precinct development. The VMU housing development, which includes a commercial and retail element, will create jobs during and post construction. There is also a taxi holding facility and petrol station site.

Phoenecian had to carry out minimal ‘soft’ work within the building itself from a structural perspective, as another sub-contractor that is part of the professional team cleared out all the internals.

Non-electronic detonation will be used, with the entire implosion expected to take a mere four seconds. An integral part of the project being coordinated by the CoJ is relocating the existing residents prior to D-Day, which is being carried out in two phases.

Following the implosion, the Phoenecian bulk earthworks division will move in to break the rubble down further so it can be reused as a platform substrate for the next stage of the overall development of the site.