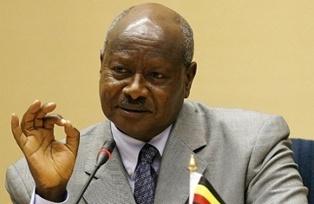 With less than 10 per cent of the population having access to electricity, his drive to transform the Ugandan economy will be addressed in the next five years.

Mr Museveni, who recently commissioned the 18 megawatt Mpanga hydro power station in western Uganda, notes that one of the major constraints to accessing electricity is the inability of the rural and peri-urban dwellers to afford connection costs yet there cannot be the desired transformation when people have no electricity.

"My government is looking into starting a subsidy scheme to to ease the burden of the high up-front connection costs and the scheme is likely to start in July," he was quoted as saying.

During his earlier speech when he was being sworn in for the next five years, Mr Museveni says when the 250 megawatt Bujagali hydro power station and other mini hydro stations are completed in 2012, Uganda's Kilo Watt Hour (kwh) per capita will be 100 against the current kwh per capita of 70.

Projects on the Nile

The Ugandan leader states that the major plan for sustainable power supply remains building big projects on the Nile river citing the Bujagali plant where 50 megawatts of the total 250MW are expected to be commissioned in October this year thus easing on the shortage of power which has led to rationing of power.

According to the current government 'Background to the Budget' publication, the construction of the 250 megawatt Bujagali dam progressed substantially during the year and about 60 per cent of the civil works were completed as well as fabrication of the turbines.

"A feasibility study on the various options for optimizing the generation capacity and the bid preparations for the Karuma hydro power station in northern Uganda is on-going," it says, while construction of the Isimba hydropower project which has an estimated capacity of about 100 megawatts is expected to commence in 2012; a detailed feasibility study which will pave way for construction is underway.

Another government document, the National Budget Framework Paper for financial years 2008/09-2012/13 notes that the shortage of power generation is a key constraint to economic growth in Uganda. In an effort to bridge the short term power deficit in the country, the government has been implementing emergency and other thermal power projects.

It names a total of 100 megawatts of thermal power that was procured and is being generated by Aggreko, a 50 megawatt high speed diesel plant at Mutundwe on the outskirts of Kampala. Another 50 megawatts Heavy Fuel Oil (HFO) plant operating on a Build Own Operate and Transfer (BOOT) basis was installed at Namanve by Jacobsen.

The Eletricity Regulatory Authority (ERA) an independent body responsible for regulating the electricity sector in the country, says the large hydro power potential along the river Nile is estimated at about 2000 megawatts with only 380 megawatts developed at Kiira and Nalubaale and 250 megawatts under development at Bujagali.

"The unexploited potential is over 13,000 megawatts," the body notes.

Umeme, the retail power distributor company in the country says it has been working together with the Rural Electrification Agency (REA) and has implemented 100 rural schemes at a cost of $6.5mn. It is also working on a four-million dollar programme to extend power in 46 rural areas around the country.

President Museveni in the meantime says the government would soon commission more projects like the 6.5 MW Ishasha, the 9MW Buseruka in Hoima, the 3.5MW Nyagak in Nebbi and the 6.8MW Kinyara Bagasse project. He adds that by the end of the year, renewable energy generation from non-river Nile sources will be 80 megawatts compared to less than 20 megawatts four years ago.

He also calls on Ugandans in the private sector  to borrow money from a new low-interest facility under the Ministry of Energy to invest more in the energy sector since commercial banks charge high interests and this discourages investors.