The Dangote Group has planned a world-class new refinery in Nigeria that would reduce the country’s reliance on imported energy and bring with it over 30,000 jobs, a project requiring some truly massive moves 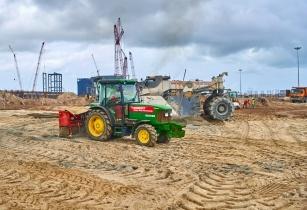 The Dangote Group has plans for a world-class new refinery in Nigeria to reduce the country’s reliance on imported energy. (Image source: Mammoet)

Giuseppe Surace, CEO at Dangote Refinery, said, “Our new refinery is the most ambitious project of its kind ever seen in Africa. Given the scale and importance of the work involved, we knew that we needed an experienced engineered heavy logistics partner who could successfully overcome challenges in the site terrain as well as the volume and size of construction components.”

Working with Nigerian partner Northridge Engineering, Mammoet was selected to meet the site terrain challenges. A solution called Environ-Mat was laid down that could support this logistical activity, providing the strength needed to withstand the transport of such massive cargo across this former river delta.

Enviro-Mat is a highly-developed soil improvement methodology, consisting of a combination of local soil, cement and additives including minerals, salt and zeolites, which increases ground bearing capacity up to 50t/m². At Dangote, Mammoet applied this additive to lay down areas, hard stands and crane pads covering over 500,000 sq m of the site.

Harm Tiddens, Mammoet’s general manager for West Africa, said, “The need for ground stabilisation can have a significant bearing on projects, so using the Enviro-Mat system gave us some real advantages. Not only were we able to undertake lifts of up to 3,000t on reclaimed swampland, but the huge area stabilised proved crucial for lay down operations to continue smoothly throughout the rainy season when this kind of land could otherwise be a challenge to operate on.”

Two of Mammoet’s largest super heavy lift ring cranes the PTC 200 DS and PT 50 completed key lifts at the refinery. The combination of mobility offered by crawler cranes on site and the lifting power over 3,000t of the ring cranes meant there was equipment on site to meet a wide range of lift requirements.

Other than being dismantled and re-assembled, the high ground bearing pressure capability provided by Enviro-Mat allowed for the PT-50 crane to be simply picked up and carried via self-propelled modular transporters between major lifts. This process saved four weeks of time for each crane relocation phase, adding up to a significant schedule enhancement for the project as a whole.