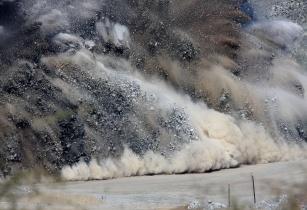 Tinus Brits elaborated, noting that presentations at the IQSA event provided an encouraging picture of emerging opportunities, especially in road construction, which is dependent on quarries for aggregate and building material.

As plans for national infrastructure repair begin to take shape for the year ahead, contractors are expected to be much busier.

“There are definitely improvements in the performance of a range of sectors, and it was exciting to hear that organisations like the South African Roads Agency Limited (SANRAL) had a strong pipeline of projects,” he said.

“As quarries position themselves for the growing demand, they are also looking at the efficiencies of their operations – which is where BME makes an important contribution.”

Brits has noticed more quarry managers opting to integrate newer blasting technology in new projects. Areas to be blasted can become more challenging as quarries age, meaning blasting techniques must rise to the challenge and become more accurate, flexible and controlled. The cost factor related to energy consumption, combined with rising electricity prices and an awareness of the environmental impact of projects, also comes into play, incentivising the more energy efficient innovations coming to market.

“Quarries want their primary blasted rock to be optimally fragmented, so that their crushers operate as productively and efficiently as possible. A presentation at the IQSA conference estimated that the added cost of secondary blasting or breaking of large boulders could reach four times the cost of the initial blast.”

This, Brits explains, is where electronic detonators and the accompanying suite of digital tools, allow quarries to achieve higher quality blasts with better results. The new AXXIS Silver, a slimmed down version of BME's flagship initiation system AXXIS Titanium, allows the same level of safety as the previous system but is aimed at smaller operations.

“Our existing customers operating our AXXIS GII system are enthusiastic about moving up to AXXIS Silver – and we also received considerable interest from potential customers who would like to see the new system demonstrated and tested on their sites,” said Bennie Van Nieuwenhuizen, BME's AXXIS quality manager. For those quarries still using non-electric detonation methods, the step to take them to AXXIS Silver™ was easily manageable.

“There has been a steady annual conversion rate of quarries from non-electric detonators to electronic detonators, of about 12-14%,” he said.

“Within the next five years, it is likely that most quarries will have moved over to electronics.”