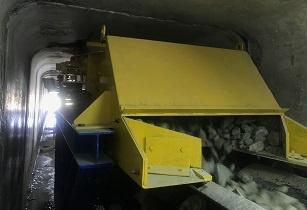 With OMV missing its target of 1,300 tonnes per day (being only able to produce 1,000 tonnes per day), it requested Weir Minerals Africa’s help in increasing the plant’s capacity.

To address this issue, OMV had to constantly monitor and manually clear the feed from the chutes which presented a considerable safety risk, as rocks would fall out of the chute once the blockage was removed.

To provide a reliable and consistent feed to the cone crushers, a Trio EF3606 vibrating pan feeder was selected. It was designed to perform in surge tunnels or under surge bins, controlling the feed rate to the next stage of processing. Combining the Trio pan feeder with a variable speed drive (VSD) and a programmable logic controller (PLC) allowed the feeder to alter its speed, based upon the levels of feed already within the cone crusher’s bins.

Weir Minerals Africa’s engineers also redesigned the chute system, and used 3D laser scanning equipment to ensure the new structure and chutes would fit within the existing footprint. The team used simulation software to reproduce and optimise the particle flow through the new chute design.

After this process, the capacity at the plant was immediately increased to 1,400 tonnes per day, a 40% daily production improvement that resulted directly from the consistent feed to the cone crusher. In addition, uptime has been increased to as much as 99.5% and the safety risk of clearing the chute has been removed.