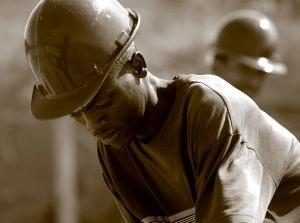 More than 1,500 mine workers, who were demanding higher pay and better working conditions, have been fired by Zimbabwean diamond mining firm Anjin Investments

The company, a joint venture between senior army figures and the Chinese, has asked the workers to re-apply if they want their jobs back.

The workers resorted to a strike after demanding at least US$650 for the lowest paid worker.

The management initially suspended the 1,500 workers for four days and fired the head of the workers committee, Tavengwa Chitima, last month.

A recent high court ruling, however, said that the strike was illegal and gave the management more leverage in dealing with the workers' demands.

The Center for Research and Development (CRD), which monitors human rights violations in the diamond mining area, said it was "deeply troubled" by the dismissal of the 1,500 workers by Anjin.

“The decision to fire the workers was arbitrary and totally uncalled for. It is also a gross violation of the right of workers to engage in industrial action if their working conditions are appalling. The intolerance shown by the Anjin management in handling the workers genuine grievances is unacceptable in modern society,” read a statement from the CRD.