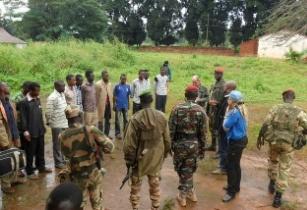 The United Nations plans to send additional peacekeeping forces to Bangassou, a diamond-mining town in Central Africa with 35,000 inhabitants, to tackle raising violence in the city that causes human right violations

Stephane Dujarric, spokesman for UN Secretary-General Antonio Guterres, replied in email that the law and order condition in Bangassou needs immediate assistance following a recent flare of attacks on civilians that has cost hundreds of lives in the past two months.

The violence in Bangassou started in 2013 when a coalition of Muslim Seleka rebels ousted the President Francois Bozize. The recent violence in the diamond-mining town is a fresh escalation of the four-year old conflict.

The recent clashes in the city erupted in the southern prefectures of Bria and Alindao. In Bria, about 1,000 people near the UN mission’s base were displaced, while more than 500 sought refuge at a UN Office of Coordination of Humanitarian Assistance compound. In Alindao, about 8,500 people have been displaced because of clashes, Dujarric said.

Unverified sources projected that almost 100 people were recently killed in the South of Africa that resumed diamond export after lifting a three-year ban.

The country was ranked as the world’s 10th biggest diamond producer by value in 2012, before the export ban, according to the US Geological Survey. The Kimberley Process, which seeks to halt the sale of gems from the war zones, estimates diamond output was worth more than US$62mn in both 2011 and 2012. The recent data is unavailable.