Lesotho’s diamond mining ambitions are on the up once again 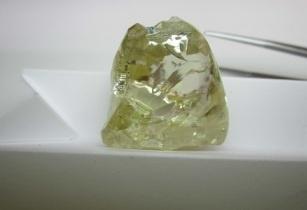 At the Liqhobong mine recently, operator Firestone Diamonds announced its largest gemstone find yet, sparking optimism that there could be much more to follow

The 110 carat gem-quality light yellow diamond was recovered during the ramp-up phase at the mine.

"I am delighted to announce that we have recovered Firestone's largest diamond to date,” said Firestone’s chief executive Stuart Brown, announcing the discovery on 5 April. “The 110 carat gem-quality light yellow diamond recovered during Liqhobong's ramp-up phase is a very exciting and encouraging accomplishment. It confirms our long-held belief that Liqhobong has large stone potential and I hope this is the first of many to come."

The London AIM-listed company has diamond mining operations in Lesotho and Botswana. It is by no means the biggest find made in the mountain kingdom of Lesotho - far from it - but it fuels hopes in the Liqhobong development, now taking shape. Lesotho’s gemstone wealth is already well-known among the mining industry.

A decade ago, the Lesotho Promise, a 603 carat diamond stone of exceptional colour was unearthed in 2006 at the Letseng diamond mine. It is believed to be the largest reported find this century, and one of the 15 largest diamonds ever to be found.