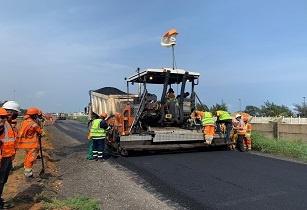 Located in the Cadjehoun neighbourhood of Cotonou, the largest city in Benin, West Africa, is Cotonou Cadjehoun Airport. The country’s largest, it serves as the primary entry point into Benin by air, with flights operating between Africa and Europe from a growing number of international airlines

Topcon was appointed to support the provision of its surverying and 3D guidance system for the entire resurfacing and partial structural recovery of the runway at Cotonou Cadjehoun Airport, the largest in Benin

The company supported contractor Colas Afrique who were tasked with the resurfacing and partial structural recovery of the runway which covers more than 2,500 metres. This was part of an investment from the government to bring the airport up to standard, improve its safety and rehabilitate the runway – a challenge which suited Topcon Posititiong’s scanning and milling technology well.

Gilles Richard, director of operations at Colas Afrique, explained, “We needed an efficient solution at the milling stage that could be applied accurately and efficiently, from a provider with a strong track record of delivering smooth, safe runways for some of the world’s busiest airports. Topcon has a global reputation in this field and we trusted the technology to help us to meet our goals.”

Before the work on the existing runway could begin, Topcon’s RD-M1 road scanner was used to conduct an initial scan. With the ability to scan a vast distance in a short time, collecting detailed surface data without the need for prolonged runway closures.

Using the data collected from the RD-M1 scanner, it was then time to begin the milling process. The system is built on Topcon’s Sonic Tracker for tight vertical thickness control, complemented by a GNSS system to deliver deliberate positional guidance – a fusion of technology that facilitates an accurate mill and removes variable amounts of the existing surface as needed.

Hervé Breton, director general of the Benin Airports Corporation, commented, “When working so hard to improve a nation’s infrastructure, it’s important to use the project to boost employment and up-skill within the local region.

“Topcon not only offers progressive and modern technology, but also extensive training, which meant we were able to employ local workers to carry out the resurfacing. As part of a wider framework to rehabilitate the airport, these initial infrastructure improvements in Benin will benefit generations for years to come. We’re extremely grateful to have participated in this join venture to open up Cotonou Cadjehoun Airport.”