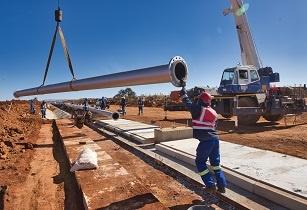 Following the successful completion of the design, Gold Fields South Deep Gold Mine appointed an owners’ team in 2009 consisting of Golder Africa and Metago to manage the execution of the construction of Phase 1 (260ha) with WBHO as the contractor and in 2011, after a two-year construction period, the commissioning of Phase 1.

After a successful first phase, the client appointed the same consultants as the owners’ team for Phase 2 (140ha) and again WBHO was appointed as the main contractor for a one-year project. The main components of the Phase 2 project consisted of bulk earthworks, main and toe drains, two concrete penstock towers, choke station and 4.6 km of steel HDPE lined pipelines.

In March 2021, WSP and SLR assisted South Deep Gold Mine with the Phase 2 tender process as well as the technical and commercial adjudication. Construction commenced in June 2021 – and the project reached practical completion at end of August 2022.

On Phase 2, WSP was appointed as the project manager and owners representative responsible for managing the owners’ teams and the project as a whole, including the main contractor. Duties involved appointing the owners’ team members which included a project administrator, quantity surveyors, health and safety officer, resident engineers and off-site quality inspections.

Considering the size of the project and potential construction risks, WSP provided a full-time senior health and safety officer to support WBHO and assist with identifying and mitigating any health and safety risks, to implement and enforce client health and safety policies and to create a healthy safety culture on-site.

To ensure that the project budget was correct from the onset, WSP appointed Bossert KPO as the professional quantity surveyors (QS) to measure the detailed design and draw up the project Bill of Quantity (BoQ). Throughout the construction phase the QS’s were responsible for cost reports, contractor monthly certificates verification, variation management and other claims.

There were several setbacks on the project including pile failures, finding suitable suppliers to meet filter sand design specifications and above average rainfall during the rain season causing unexpected challenges and delays. However, lessons learned from WSP and SLR’s history on the site running back to 2007 and their extensive company experience ensured these were effectively dealt with and the project was complete by the end of August 2022.