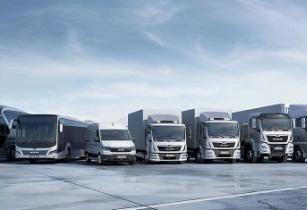 MAN will be exhibiting a large number of driveline innovations and sector-specific product upgrades at bauma, to be held in Munich from 8-14 April 2019

The 11 MAN vehicles will be presented on stand 325 in hall B4, as well as on an outdoor stand outside the same hall.

A further five vehicles exhibited on the open area in front of hall B4 will demonstrate the detailed sector-specific preparation of the MAN chassis units for their often specialist construction tasks:

MAN will be extending its initiative offering concrete deliverers a truck mixer chassis with an extremely high load capacity by optimising the weight of various auxiliary units. The upgrade to the new MAN D15 engine series in 2019 will reduce the chassis weight by a further approximately 230 kilograms. This means around 410 kilograms additional payload - a big gain in terms of efficient transportation.

The MAN TGE series covers the range from three to 5.5 tonnes gross train weight, adding new models at the bottom end of the MAN truck portfolio, which previously ranged from 7.5 to 44 tonnes. The MAN TGE marked its world premiere in autumn 2016 at the IAA commercial vehicles show in Hanover.

The new Euro 6 standard nine-litre D15 engine will be replacing the tried and proven D20 engine in the MAN TGS and TGX truck series in 2019. The straight-six engine achieves higher power, lighter weight and better fuel efficiency, despite a smaller cubic capacity. The engine's light weight is a major benefit for sector-specific applications. The payload is increased by about 230 kilograms. The new engine design is a particular boon to transporters of bulk cargo, such as fuels, mineral oils and concrete.

This year MAN will be introducing ComfortSteering in the TGM, TGS and TGX model series featuring the new engine family. This active steering system assists the driver by adapting the steering forces to the vehicle's speed.

This system also provides the technical basis for the Lane ReturnAssist (LRA) feature. If the driver unintentionally drifts out of the lane without indicating, the LRA activates and guides the vehicle back into the marked lane.

Some of the truck exhibits on the MAN stand include the VAS Video Manoeuvring System which shows the driver the blind spot on the near-side of the vehicle, so providing early detection of critical situations when turning or manoeuvring.

For the 2018 model year, MAN presented a new cab interior for trucks with Euro 6 engines. In the course of 2019, all TGL, TGM, TGS and TGX series models conforming to emissions standards below Euro 6 will also be fitted with the new interior. Design, functionality and ergonomics are the focus areas.