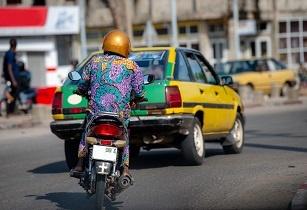 Urgent action is needed to address the boom in sub-Saharan motorcycles to deliver on safety, sustainability and climate, warns a new report by NGO Amend, the FIA Foundation, and the Fédération Internationale de Motocyclisme (FIM)

The report, ‘The Wheels of Change: Safe and Sustainable Motorcycles in Sub-Saharan Africa,' examined the motorcycle boom on the African continent. It makes recommendations with a proposed Action Agenda to maximise motorcycle benefits while managing and minimising their risks.

The report highlighted that there are 27 million registered motorcycles in sub-Sahara Africa as of 2022, rising from just five million in 2010. They have been used to address mobility gaps in formal and public transport systems, reaching isolated rural areas, offering navigation through overcrowded urban streets, and supporting first and last-mile journeys. The motorcycle boom supports livelihoods and economies by offering new mobility and commerce options and their use is expected to spread and grow. Young men, who often struggle to find formal economic opportunity in the region, have particularly benefited. Millions of people rely on the sector through ancillary roles such as taxi or delivery services

The health impacts of motorcycles are, however, profound, the report warns. Motorcycle riders account for more than half of all road deaths in some countries: In Togo, the figure is more than 70%. Standardised helmet use is the single most effective way of reducing motorcycle head injuries by up to 72% and fatalities by up to 39% (according to WHO). Legislation and enforcement for safe use by riders and passengers alongside certified standards, with robust testing facilities, are needed according to the report.

More than half of all child pedestrians injured on the roads in Dar es Salaam, Tanzania, are hit by a motorcycle, as road traffic death rates continue to rise across Africa. Anti-lock braking systems (ABS) can reduce fatalities by up to a third. Government-mandated ABS on new motorcycles, as has been recently introduced in China and India, would have a significant impact on safety and prevention of death.

Saul Billingsley, FIA Foundation executive director, said, “In the rapid growth of motorcycle use we see the balance between lives and livelihoods played out on the streets. Motorbikes provide relatively cheap transportation, but they are expensive for society in injury and environmental damage. With some African cities predicted to double in size in the coming decade there is an urgent need for an action agenda that both mitigates these negative impacts, with a focus on motorcycle helmets, ABS and electrification while planning for a low carbon future based on widely available, clean public transportation.”