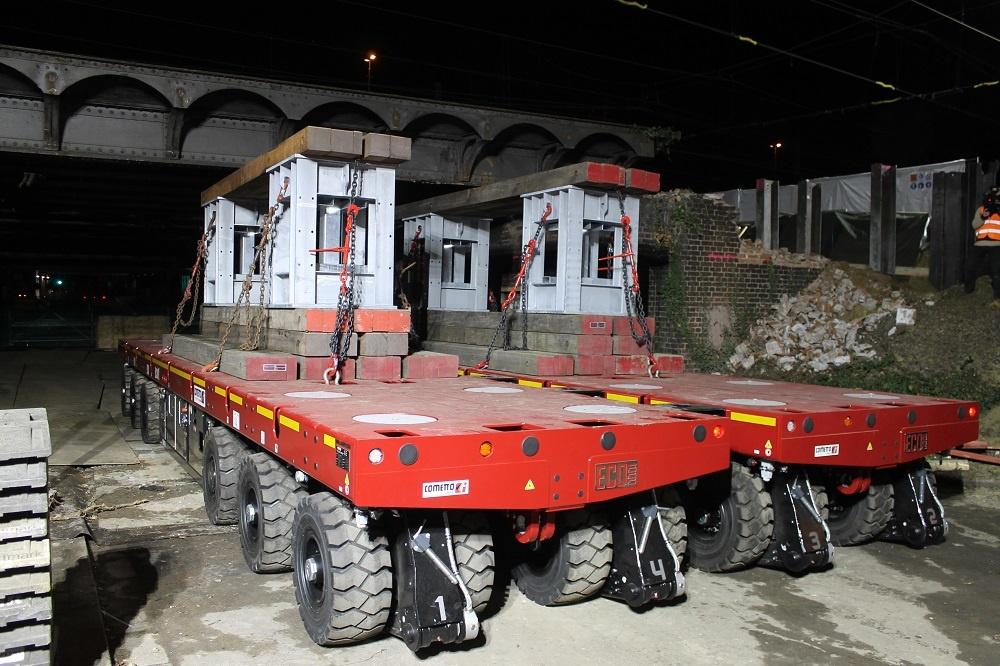 The first six of a total of eleven bridge elements had to be moved by Schares in a night-time operation. To lift the bridge elements, the ideal transport solution was found in two six-axle self-propelled vehicles, electronically-coupled in side-by-side configuration. The total payload capacity was 520 tonnes.

The Eco1000 self-propelled trailers, up to the task:

In Oberhausen, Schares employees alternately managed the operation of the self-propelled transport vehicle. A single remote-control with 4.3" screen is all that is required to manoeuver this side-by-side combination. Lifting the 14m long bridge elements by crane was not feasible - it would have meant Deutsche Bahn having to dismantle the electrical overhead lines above the tracks at huge cost. Instead, the Cometto Eco1000 self-propelled vehicles were utilised.

When the signal was given that the overhead lines were current-free, the modular combination was set in motion. To compensate for the height of the bridge, additional excavator mattresses and load bearing blocks were mounted on the side-by-side self-propelled vehicle. The Cometto Eco1000 advanced in lowered position under the bridge sections to get ready for lifting.

After precise positioning of the vehicles, the hydraulic bogies lifted two bridge sections at a time from the bridge bearings. They repeated this manoeuvre three times. This was the moment for the Cometto Eco1000 to utilise its 700 mm axle stroke. The riveted bridge elements were then carried 30m back to a mobile crane, which took over and loaded them onto a flatbed trailer. It was a demanding night-time operation. After six hours of concentrated effort the site management received the news that the mission was accomplished.

For Schares this mission was its introduction to self-propelled transport. Twenty eight years after the company purchased its first Faymonville two-axle lowbed trailer, Schares again turned to the expertise of the Faymonville Group.

Christoph Schares, CEO at Schares, was delighted at how precisely the electronic multi-way steering made positioning the self-propelled Eco1000 under the load. He commented, "The self-propelled horizontal transport technology from Cometto will complement our cranes on our building sites in the future, enabling us to offer our customers real added value and above all, everything from a single source."