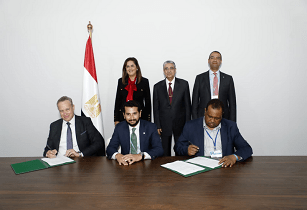 At COP27, The Sovereign Fund of Egypt (TSFE) and ACWA Power have signed a MoU to explore a joint investment in the 1.1 GW Suez Wind Energy project, located in the Gulf of Suez in Egypt

Under the terms of the MoU, ACWA Power and TSFE will now engage in discussions for TSFE’s Infrastructure & Utilities Subfund to own up to 10% of the project. Currently, project investors include Hassan Allam Holdings, an Egyptian engineering, construction and infrastructure company (25% stake) and ACWA Power. The Oman Investment Authority, the Sultanate’s sovereign wealth fund, recently signed a similar agreement with ACWA Power, to have an equity stake of up to 10% of the same facility.

Mohammad Abunayyan, ACWA Power chairman, commented, “This is another significant manifestation to our strategy to continue to invest into renewable power generation to decarbonise Egypt's energy sector and capitalise on green energy sources in the country. It shows our commitment to transition from pledges to implementation in collaboration with private-sector pioneers. We have strong confidence in our partner’s ability to deliver such large-scale projects, building on their expertise in the renewable energy field and their presence in the Egyptian market.”

Badr added, “By 2026, the 1.1 GW Wind Energy project will provide energy to over a million households and displace 2.4 million tonnes of carbon dioxide emissions annually. Elsewhere on the African continent, ACWA Power has a number of projects in development or in operation; five projects in Morocco and three in South Africa all in renewable energy.”