TU/e researchers want to develop solar cells with an efficiency of over 65 per cent by means of nanotechnology. In Southern Europe and North Africa these new solar cells can generate a substantial portion of the European demand for electricity. The Dutch government reserves EUR 1.2mn for the research. 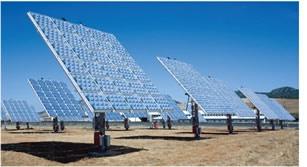 Researchers expect considerable savings can be made on solar production costs

An agency of the Ministry of Economic Affairs, will grant the EUR 1.2mn to researchers dr. Jos Haverkort, dr. Erik Bakkers en dr. ir. Geert Verbong for their research into nanowire solar cells. It is their expectation that, when combined with mirror systems, these solar cells can generate a sizeable portion of the European electricity demand in Southern Europe and North Africa.

The current thin-film solar cells (type III/V) have an efficiency that lies around 40 per cent, but they are very expensive and can only be applied as solar panels on satellites. By using mirror systems that focus one thousand times they can now also be deployed on earth in a cost-effective manner. The TU/ researchers expect that in ten years their nano-structured solar cells can attain an efficiency of more than 65 per cent. Jos Haverkort: "If the Netherlands wants to timely participate in a commercial exploitation of nanowire solar cells, there is a great urgency to get on board now." The research is conducted together with Philips MiPlaza.

They think that nanotechnology, in combination with the use of concentrated sunlight through mirror systems, has the potential to lead to the world’s most efficient solar cell system with a cost price lower than 50 cent per Watt peak. In comparison: for the present generation of solar cells that cost price is 1.50 euro per Watt peak.

Stacking
Nanowires make it possible to stack a number of subcells (junctions). In this process each subcell converts one color of sunlight optimally to electricity. The highest yield reported until now in a nanowire solar cell is 8.4 per cent. Haverkort, “We expect that a protective shell around the nanowires is the critical step towards attaining the same efficiency with nanowire solar cells as with thin-film cells." Haverkort thinks that at 5 to 10 junctions he will arrive at an efficiency of 65 per cent.

Scarcity of raw materials
In addition, the researchers expect considerable savings can be made on production costs, because nanowires grow on a cheap silicon substrate and also grow faster, which results in a lower cost of ownership of the growth equipment. What is more, the combination of the mirror systems with nanotechnology will imply an acceptable use of the scarce and hence expensive metals gallium and indium.