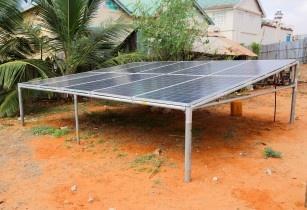 The solar system, set up by AMISOM, is a ‘Quick Impact Project’, procured with funding from the government of India to support law enforcement activities and boost security in the Jubaland State. The system was handed over by Augustine Magnus Kailie, police commissioner, assistant inspector general of police, AMISOM.

Kailie noted that the solar lighting would assist the Jubaland police officers in performing their duties and in providing better service to members of the community. “The project is part of our mandate to build the institutional capacity of the Somali police force,” he said at the handover ceremony.

Maxwell Chikunguru, police reforms, restructuring and development coordinator, assistant commissioner of police, AMISOM said that the mission will continue to work with the Somali police force to build capacity, train personnel and equip it to internationally acceptable standards.

“For police officers to perform their duties at night, they need lights to enable them to work effectively and efficiently. This solar system will go a long way to boost the morale of the police officers and to make the community safer,” added Chikunguru.

Colonel Sadiq Mohamed Dhogor, police commander for the Lower Juba region, said, “To be effective, a police station needs a constant supply of electricity, which we now have here. With such support, we can only serve our community better, and we are very grateful to AMISOM and our international partners for this support.”