HIMOINSA Southern Africa has supplied rental equipment with 8MW of prime power for an LNG and helium plant in Free State, South Africa 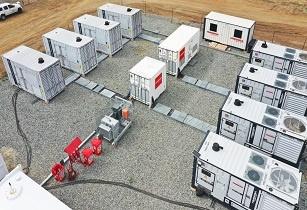 The HIMOINSA team installed and commissioned a fully functioning power plant within three weeks of the site being ready. (Image source: HIMOINSA)

The Virginia Gas Project by Tetra4, a wholly owned subsidiary of Renergen, will produce LNG and liquid helium, making it the first helium facility in sub-Saharan Africa.

This helium is required worldwide to manufacture semi-conductors, fibre optic cabling and provides deep cryogenic cooling for the superconducting magnets that are critical components in magnetic resonance imaging (MRI) devices.

During the construction process, no electrical connection was available, necessitating Renergen to proceed with a self-build electrical connection to the Eskom grid infrastructure and, in the interim, ensure they had a temporary, prime power solution to ensure timely commissioning of the Phase 1 Virginia gas Project.

HIMOINSA Southern Africa won the tender for an eight month 8MW rental contract and successfully provided a competitive, flexible, turnkey power solution. The team installed and commissioned a fully functioning power plant within three weeks of the site being ready. The units were installed and provisioned on site early to ensure there were no production delays due to lack of power. Extensions to the original contract term were also accommodated.

Eight fully synchronised generator sets, neutral earth transformers, fuel tanks and a control room, were installed to run the site at 8MW prime capability, compliant with all health and safety requirements. A 200kVA unit was also provided for temporary use during the construction phase.

The plant ran efficiently on a fully turnkey solution, including the necessary manpower and operational planning requirements for the contract term, and beyond, until the utility connection was successfully installed, and the temporary power plant decommissioned

Matthew Bell, director of business development at HIMOINSA Southern Africa, commented, “It was an honour for HIMOINSA Southern Africa to be selected by Renergen for the Tetra4 processing facility and a delight to see Stefano and Nick take this project from inception to operation. This is a great success story for South Africa that we are delighted to have been involved in supporting the project to fruition with an interim, cost effective, quality power solution. We wish the Renergen team all the best in the future with this fantastic project.”