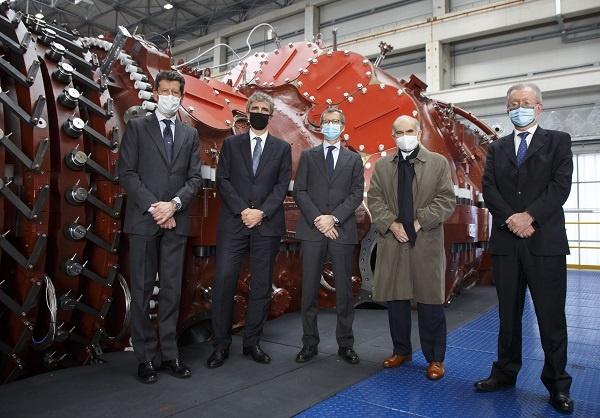 Ansaldo Energia, a subsidiary of the CDP Group, has presented the new GT36 turbine at the Genoa plant

“The GT36 turbine built for Edison will take off to power the Porto Marghera combined cycle plant, which will then be able to reach a total electrical power of 780MW and an energy efficiency of 63%, the highest made available today by technology, with a reduction of specific CO2 emissions by 40% compared to the average of the current Italian thermoelectric park, and of nitrogen oxides (NOX) by over 70%. When fully operational, it will be the most efficient thermoelectric plant in Europe,” according to the company.

The project, including the research and development process, unfolded over seven years, with a commitment of more than 3.7 million hours worked. Nicknamed "Monte Bianco" as the European top for power, this turbine, in the 50Hz version presented, reaches 538MW (ISO conditions) of power. This means that with its activity it is able to support the consumption of electricity of almost 500,000 households.

In total, the turbine weighs 520 tonnes, as much as 400 cars. It is almost 13.5 metres long, as high as a large coach bus; placed vertically, it would be as high as a four-storey building.

“We do not hide our pride in the result achieved. For this we also thank our majority shareholder, CDP, who has believed in this project,” comments Giuseppe Marino, CEO of Ansaldo Energia. "All the work for the construction of this turbine took place in a difficult period of time, due to the limitations imposed by Covid: nevertheless, in maximum safety, Ansaldo Energia staff worked tirelessly to guarantee that the Edison turbine could be delivered in due time.”

"It is with great satisfaction that we participate today in the departure of the brand new GT36 turbine from the Ansaldo Energia shipyard," declares Nicola Monti, Edison's CEO.