How Subsea 7 will serve Total in Angola 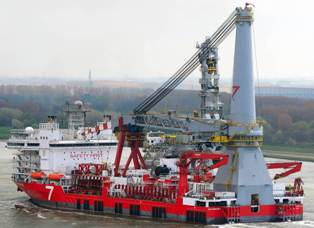 A recent tour of the Borealis reaffirmed Subsea 7's emphasis on safety, efficiency and effectiveness. The vessel is highly capable, and its crew are trained and supported in maintaining a strict regime of secure, systematic operation.

The vessel's capabilities and equipment are extensive, too. Observe that it has its own cargo barge, to supply the vessel. See that its towers can be mobilised at each location. Understand that the main line of the S-lay system can be adjusted to suit any configuration, any process - to accommodate any client requirements.

Most recently, the Seven Borealis has been sited in Schiedam, in the Netherlands, at Huisman's facility, where outfitting has been completed before mobilisation to West Africa. A global enterprise offering extensive experience in the design and manufacture of heavy construction equipment for on and offshore companies, Huisman has prepared the Seven Borealis to handle a pipe every three minutes.

There is more to be learnt about the vessel's capabilities. The Seven Borealis is equipped with an S-lay system to lay pipe from 11cm to 117 metres. For laying pipe in extreme deep water, the J-Lay tower, positioned starboard, can be used and can lay pipe from 10cm to 61cm in water depths of up to 3,000 metres.

There are three two-hundred tensioners on the Seven Borealis. There is a large red structure within - a sheath, which folds down to support manoeuvrability of the winches. There is a 600-ton abandonment recovery winch, and a 200-ton winch, both for S-lay. There is a 200-ton winch for J-lay operations. There are, also, selected small winches for specialist operations. There is a 200 metre S-lay tensioner - which consists of an upper track, a lower track and supporting equipment. It is rail-mounted, and ensures accurate load measurement.

The Seven Borealis features, also, a window large enough to accommodate in-line structures - T pieces, for example - after welding. The vessel has, too, a 109mm auxiliary wire with a single line capacity of 300 tons, for use during pipe laying. Below this, in a winch room, is a 300-ton winch, operating the auxiliary wire.

Focusing further on the vessel's heavy equipment, Mr Gilbert showed the rotary crane, which operates 600mm wire. The crane was tested at 500 tons, said Mr Gilbert, "and didn't even flinch”. Just as impressive, note here that the J-lay can turn to any angle, so that it can operate independently of the ship's own direction. Note, also, that the three-section stinger can be configured to suit specific operations. It can, in fact, create a pipe radius from 70 to 300 metres.

“The stinger on the Borealis is up there with one of the biggest around," said Simon Gilbert, an offshore manager at Subsea 7. Mr Gilbert manages operational matters, from crane management to pipe handling and deployment. Speaking, recently, on the deck of the Borealis, Mr Gilbert also highlighted the vessel's "world-class ROVs" - remotely operated vehicles, both of which are controlled from one controller.

Additionally, the Seven Borealis has its own gas systems producing oxygen and acetylene. The commercial partnership ensuring safe and secure operation here is the technology firm iGas, which was chosen by Subsea7 due to its experience in delivering gas supply and distribution projects throughout Europe and beyond - utilising cost-effective and advanced technology and design.

Inside the administrative bowels of the Seven Borealis, the software underpinning the ROVs is developed by Schilling Robotics, a company that brings 25 years of technological expertise to the challenges facing customers in the subsea environment.

With Schilling's support, Subsea 7 designed the ROV control station in-house to exceed the concept of "fit-for-purpose" – in Simon Gilbert's words - offering capabilities that not a lot of comparable vessels have. Development of the ROV control stations may be associated with development of a paperless system for task planning. This is a technologically advanced vessel, not just in terms of its ability to deliver flexlay capabilities, but also in terms of administrative functionality. Within the Seven Borealis, one sees the deployment of an integrated system of software, hardware and defined processes to manage information through creation, capture, storage, retrieval, distribution and retention.

Looking across the navigation bridge, one can affirm that there are no paper charts - it is all electronic, and with comprehensive use of GPS systems. Looking, then, for a practical example in internal and external communications, one can observe that the Seven Borealis is fitted with Cisco IP phone equipment.

A few steps away from the navigation bridge, there is evidence on the chief officer's desk on the working bridge, in the form of a Cisco IP Phone 7962G – a capable, high-end unified communications device designed to meet the needs of managers and administrative assistants.

With programmable buttons and interactive soft keys applicable to all call features and functions, this hands-free speakerphone and handset offers hi-fidelity wideband audio, and features a built-in headset connection and an integrated Ethernet switch, representing a sound choice of communications hardware - user-friendly and one of the easiest phones to use, offering stable IP telephony (obviously, depending on the capacity and stability of data connection). Observe that even a detail such as choice of phone indicates in keeping with Subsea 7's emphasis on effective, efficient operation.