Access to clean, affordable energy for Africa on the agenda at IP Week

Government cooperation is important but the private sector is expected to lead the way in boosting access to energy - this was the message from an African panel session at IP Week, held in London last week 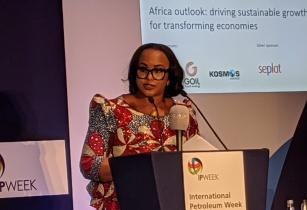 Ms Joe-Ezigbo opened the session by emphasising the role that gas, as the cleanest-burning fossil fuel, has to play in Africa’s clean energy transformation. She added that Africa can “leverage its technology, people and unique competencies” to drive the change and ensure more people have access to affordable energy.

Mr Pollen told delegates that in the gas sector, Invest in Africa has been active in facilitating investment in gas-to-power and LNG projects as well as renewable energy. This has been bolstered by significant gas discoveries in Senegal, Mauritania and Mozambique. He said it was important for the private sector to play a leading role as waiting for governments to catch up can take too long.

Ms Ndiaye said “willingness” is needed on the part of the private sector if they are to play their role in energy transformation “in an economically viable way”, and countries “can't rely on government to do all” in relation to meeting the UN's Sustainability Development Goals. She added that all countries across Africa “do not have the same trajectories” in regard to fighting climate change and transitioning to green energy, citing the example of Senegal’s heavy reliance on oil and South Africa’s heavy reliance on coal for electricity generation.

She told the conference about the importance of the major gas discovery off the coast of Senegal and Mauritania, which Kosmos is developing in partnership with BP. She said the aim should be “cheap energy for the population developed in a climate-friendly way”.

The Seplat spokesman said that Nigeria in particular has a “responsibility to meet energy transformation goals”.

“We have the resources to solve energy supply issues,” he told delegates, citing the increased use of LPG for meeting domestic needs, as well as the importance of mini-grids and micro-grids.

“Market forces have to move in - lower tariffs haven’t worked for access to electricity,” he said.

The importance of infrastructure was raised, particularly in regard to pipelines, many of which are on the drawing board in Nigeria.

Mr Olafisan said the whole African value chain needs to be developed to ensure access to energy is achieved.