Construction begins on uranium mine in Namibia 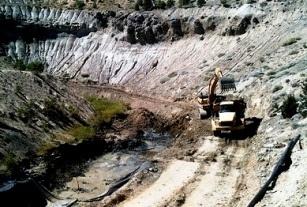 Construction of the Husab mine will cost of about US$129mn and will be completed in 2014. The first production batch of uranium ore will be expected by 2015.

The mine, which is located 60km northeast of Swakopmund, is expected to have at least 142,000 tonnes of uranium resources with an average grade of roughly 0.04 per cent that could be mined for more than 20 years.

Full production from the mine will be expected by 2017, with mining from two separate open pits feeding ore to a conventional agitated acid leach processing plant.

Husab mine will potentially be the third largest uranium production facility worldwide, slightly behind the McArthur River and Cigar Lake mines in Saskatchewan.