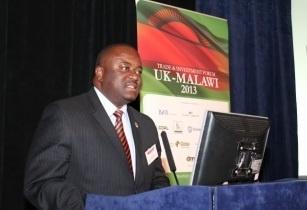 Malawi’s minister of mining, John Bande MP, highlighted the importance of the country's mining sector at the Malawi Trade and Investment Forum 2013, stating that the country continues to unlock its business potential following the discovery of various minerals

Addressing delegates at the event, held on Wednesday 20 March at Drapers Hall in London, Bande (pictured) said, “We are slowly but surely discovering a number of deposits in Malawi. That’s the whole reason President Dr Banda has selected mining as one of the priority areas under the economic recovery plan.”

Other speakers at the event included Alexander Lemon, president of Canadian mineral exploration company Mkango Resources, who discussed the exploration work the company was carrying out at present in Malawi.

Mkango Resources holds a 100 per cent interest in two exclusive prospecting licenses that cover a combined area of 1,751 sq km in southern Malawi and has set out to explores rare earth elements and other minerals in the country.

Lemon praised the Malawian government and the World Bank for their support in carrying out mining projects in Malawi and welcoming investors from abroad.

Also commencing work on a mining project in the country, is Intra Energy Corporation, which will design, construct and operate a 120MW to 140MW coal-fired power generation facility at Chipoka in Salima.

Graeme Robertson, chairman of the Intra Energy, said that its objective was to set-up “an international standard coal mine to supply existing industrial markets and support coal-fired electricity generation in the country”.

President Joyce Banda, who also spoke at the event, said ahead of her visit to the UK that ”the visit will enable me to discuss further cooperation between Her Majesty’s government and Malawi on development and showcase Malawi trade and investment opportunities to UK businesses as one way of graduating from aid to trade”.

Malawi’s natural resources include limestone, uranium, coal bauxite, phosphates and rare earths, although, deposits of other minerals including gold and diamonds have recently been discovered in the country.

The most advanced new mining development is the Kanyika niobium project at Mzimba, north of Lilongwe, with production of ferro-niobium is expected to begin 2015, with a 20-year mine-life.

Mining in Malawicontributed 13 per cent towards the country Growth Domestics Product (GDP) in 2010, which is now expected to rise by 20 per cent in 2016.