Ivanplats begin construction for Shaft 2 at the Platreef platinum-group metals, nickel, copper and gold mine in South Africa 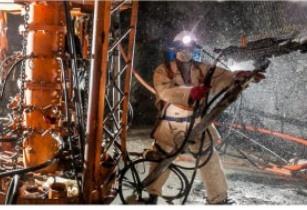 Robert Friedland, Executive Chairman of Ivanhoe Mines , and Lars-Eric Johansson, Chief Executive Officer, announced on 12 April that the company has approved the start of early-works construction for Shaft 2, which will be the main production shaft at the Platreef platinum-group metals, nickel, copper and gold mine now being developed in South Africa.

Ivanplats, Ivanhoe Mines' 64 per cent-owned subsidiary, is expected to begin the two-part, early-works program for Shaft 2 in Q2 2017. The program will consist of: excavation of a surface box cut to a depth of approximately 29 metres below surface; and construction of the concrete hitch (foundation) for the 103-metre-tall concrete headgear (headframe) that will house the shaft's permanent hoisting facilities and support the shaft collar.

Shaft 2 will be located approximately 100 metres northeast of Shaft 1, where permanent sinking has been underway for eight months. Shaft 2, with an internal diameter of 10 metres, will be lined with concrete and sunk to a planned, final depth of more than 1,100 metres below surface. It will be equipped with two 40-tonne rock-hoisting skips capable of hoisting a total of six million tonnes of ore per year - which will be the single largest hoisting capacity at any mine in Africa. The headgear for the permanent hoisting facility was designed by South Africa-based Murray and Roberts Cementation.

"This is another key milestone in the building of a new, state-of-the-art underground mine in South Africa," said Robert Friedland. "Shaft 2 is the key to unlocking Platreef's full potential and we believe that the time is right to prudently move forward with the development of this world-scale project."

Dr. Patricia Makhesha, Ivanplats' Managing Director, added: "We are committed to developing Platreef into South Africa's next great platinum-group metals mine, generating widely shared economic benefits to the South African economy and helping to deliver important jobs, skills training and enterprise development opportunities to the communities in the Mokopane area."

Feasibility study expected to be released in Q2 2017.

Ivanplats plans to develop the Platreef Mine as an underground mining operation in three phases: 1) an initial annual rate of four Mtpa to establish an operating platform to support future expansions; 2) a doubling of production to eight Mtpa; and 3) another expansion phase to a steady-state 12 Mtpa. At a projected production rate of 12 Mtpa, Platreef would be the largest platinum-group metals mine in the world, producing more than 1.2 million ounces of platinum-group metals per annum.