French logistics group Necotrans, along with the Kribi Port Multi Operators consortium (KPMO), has won a contract for the multipurpose terminal at the Kribi port 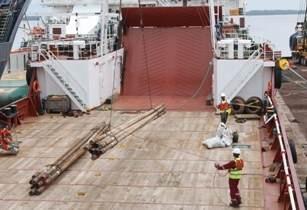 Necotrans wants to increase the pace of handling and the storage zones at the Kribi port. (Image source: Arekipa Productions/Necotrans)

Necotrans and KPMO, which is made up of nine local operators involved in forwarding, maintenance and maritime agencies, will jointly operate and maintain the terminal at the deep-water port.

“We are particularly proud to have joined our colleagues from Cameroon in a win-win partnership, and to have gained the trust of the authorities in the country. Kribi is the only deep-water port in Central Africa, and as such is destined to become the economic driving force of Cameroon and the sub-region, especially Chad and Central Africa,” explained Grégory Quérel, chairman of Necotrans.

Kribi is 150 km south of the Douala port and has a draught of 17 metres. The multipurpose terminal will initially have a quay measuring 265 metres with 2 berths and will be equipped with two cranes on rails and six truck-mounted cranes. The precise terms of the contract have not yet been decided by the authorities in Cameroon, but estimates suggest a concession of 20 years, an investment of about US$29.5m and licence fees to be paid to Cameroon by Necotrans/KPMO.

After a first phase of five years with an activity estimated at 1.4 million tonnes of freight per year from the second year, the second phase of 15 years foresees the provision of an adjacent quay measuring 350 metres and complementary facilities and equipment for an activity that will surpass three million tonnes per year.

“Our investment will enable us to increase the pace of handling and the storage zones so that Kribi can be as competitive as possible, complementing the port of Douala”, added Quérel.

The multipurpose terminal at Kribi will provide work for over 250 people. The main goods handled will be vehicles, wood, cotton, mineral ore and oil and gas equipment, together with the materials used for the construction of the industrial zone and the future power plant that will be adjacent to the port.