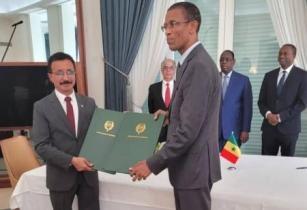 DP World has signed an agreement with the government of Senegal to develop a deep water port at Ndayane, located approximately 50km from the existing port

The agreement is part of the 50-year concession for the Port of Dakar, which has two 25-year terms, and commences once operations begin at the new port, according to the addendum to the existing concession of 2017.

The agreement came after constructive, detailed and fruitful discussions between HE Macky Sall, President of Senegal, and Sultan Ahmed bin Sulayem, group chairman and CEO of DP World. The new port at Ndayane will strengthen the attractiveness of Senegal to foreign investors.

Sultan Ahmed bin Sulayem, group chairman and CEO of DP World, stated, “The new port will create jobs, attract new foreign direct investment to the country, and enable new trading opportunities that bring about economic diversification. I would like to thank His Excellency President Macky Sall, for his leadership and vision for the development of the port, and for partnering with us on this exciting project.”

The agreement was signed in Dakar by the Minister of Fisheries and Maritime Economy of Senegal, Alioune Ndoye and Sultan Ahmed bin Sulayem.

Cheikh Kante, minister of state, Special Envoy to the President, added, “The development of the new port at Ndayane will enable Senegal to maintain its position as the maritime gateway to the region and play a significant contribution towards the realisation of HE Maky Sall’s vision for an emergent Senegal.”

The first phase of the Ndayane container terminal will be operated alongside the existing DP World Dakar container terminal. The Senegalese government’s vision supports the development of the Port of Ndayane as a site for the next 100 years of port activities. DP World will develop a special economic zone near the Port of Ndayane to enhance Senegal’s attractiveness to foreign investors in West Africa.

Senegal recently became the second country to join the World Logistics Passport, a major initiative by Dubai established to increase trading opportunities between developing markets and overcome trade impediments, further boosting its position as a trade hub for West Africa.