GE to target growth sectors in Nigeria and Ethiopia

General Electric (GE) has plans to increase revenue from Africa to around US$10bn by 2020, by specifically targeting the railway, energy and health sectors in Nigeria and Ethiopia 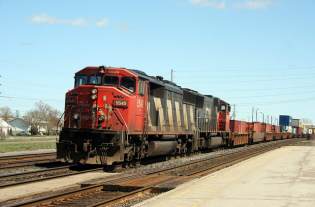 Nigeria transports only 0.1 per cent of its freight by rail, and GE hopes to boost the locomotive sector in the West African nation. (Image source: Bobolink/Flickr)

GE plans to resume talks with the new Nigerian government led by Muhammadu Buhari on an agreement with the previous administration for 200 locomotives.

At the recently concluded World Economic Forum on Africa 2015 held in Cape Town, GE president for transportation in Africa and South Africa Thomas Konditi said, “We’re bullish on Nigeria. We met with a couple of the incoming leadership and they have put rail right behind power. They don’t have mines as much, so you’re going to look for more general freight.”

Nigeria, which is currently Africa’s biggest economy, transports only 0.1 per cent of its freight by rail and could boost the number of locomotives from 25 to as many as 500 engines. However, downturn in commodity prices, power cuts and political instability have gripped several African economies and hindered progress, observed world leaders at the forum.

Though the current economic and political infrastructure is subject to stability, there are high expectations from the continent. GE’s African revenues will exceed US$4bn in 2015, mainly led by Nigeria, Angola and South Africa, according to Konditi. Company CEO Jeff Inmelt has identified Africa as a major growth area, and has plans to invest US$2bn in the region by 2018 in addition to doubling its workforce. The USA-based company feels Africa would be a potential manufacturing hub and Nigeria, the ideal location to develop a unit.

In addition to Nigeria, GE will also focus on Ethiopia to improve healthcare access and facilities.