The year 2021 marks three decades since Diehl Metering began developing its high-precision ultrasonic measuring technology and, in this time, the company has launched several generations of ultrasonic meter, continually improving the technology thanks to close collaboration with its customers 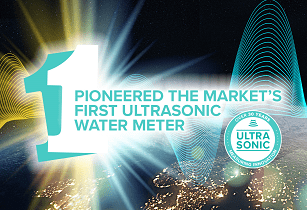 Today, there are over 5.2 million SHARKY meters and 4 million HYDRUS meters operating around the world. (Image source: Diehl Metering)

In 1998, after years of development, Hydrometer launched SHARKY, its first ultrasonic flow sensor for the heating market. It then followed up with the SHARKY compact heat meter in 1999. Over the next few years, the company continued to improve its ultrasonic technology, unveiling the second generation of SHARKY in 2003. A year later, the third-generation ultrasonic compact energy meter SHARKY 773 integrated flow sensors with new transducers and electronics. It remains the basis for today’s ultrasonic meters from Diehl Metering.

HYDRUS: the first ultrasonic water meter on the market

In 2008, Hydrometer was the first company to market an ultrasonic water meter. The starting point for developing the HYDRUS meter was a customer experience in the Emirates.

Hydrometer had been working in the Middle East since 2005, when cities such as Dubai and Abu Dhabi began expanding rapidly. With water being such a limited resource in the region, high-quality meters were an essential tool for ensuring water was managed efficiently. However, the standard water meters of the time struggled to cope with the ever-present desert sand, which worked its way into the pipes, causing blockages and often permanently damaging the meters within just two or three years.

Named HYDRUS, a combination of Hydrometer and US, the abbreviation for Ultrasonic, the meter was a direct response to difficult desert conditions. It was designed to resist high temperatures and high humidity, as well as withstand sand and air in the pipes. With such a robust design, the HYDRUS meter is capable of long-term performance anywhere in the world.

Since SHARKY and HYDRUS were first launched, Diehl Metering has continued to listen to its customers and adapt its technology to their needs. The battery life has been extended to up to 16 years, and both ranges of ultrasonic meter are now available in all common nominal sizes. HYDRUS was also recently launched in an ultrasonic Bulk version.

From 2010, Diehl Metering integrated its IZAR radio technology into all its ultrasonic meters, replacing the previous plug-in system. With meters now IZAR-ready, utilities can immediately benefit from remote readings and automatic data transmission in a fixed network, as well as the potential of the Internet of Things.

Thirty years after Hydrometer began developing its ultrasonic meters, the technology has become a cornerstone of Diehl Metering’s smart metering solutions. Today, there are over 5.2 million SHARKY meters and 4 million HYDRUS meters operating around the world.