Cape Town-based BB Cranes has released details on a number of recent orders, the result of skills transfer from Condra, the Johannesburg parent company 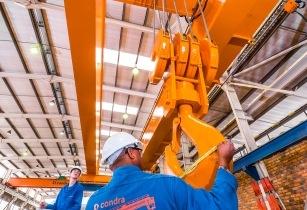 Noteworthy on the list are two Class 4 cranes, the first to be built by BB and possibly the first of this class ever manufactured in the mother city. The very heavy-duty, double-girder overhead travelling cranes, identical in design, are capable of two and three-shift operation, and feature fast long-travel and cross-travel speeds to maximise productivity.

To be installed in a Wellington factory producing export-grade charcoal from invasive alien trees, the twin cranes will be hardworking machines moving charcoal pots in a continuous cycle between kilns and the cooling and packing stations. The identical five-tonners will have spans of 15 m and lifting heights of 9.4 m. Controlled by pendants, they will lift at speeds of up to 8 m per minute. Cross-travel speeds will be 38 m per minute, and long-travel speeds anything up to 80 m per minute, equivalent to an exercise-paced walk. All these speeds are notably faster than those found in conventional overhead crane applications.

“This order is significant for BB Cranes because it demonstrates that machines with this type of advanced specification can and are being built in Cape Town’s backyard,” commented BB Cranes spokesman, Stephen Brink.

“We have received skills transferred from Condra for this level of manufacture, a big win for us. And our customer wins because the cost of importing these cranes, or having them transported all the way from Johannesburg, has been eliminated,” he added.

Beisdes the two Class 4 machines, BB Cranes is to manufacture four portal cranes and a further four overhead cranes for two separate shipbuilding companies in Cape Town itself. The four portal cranes are for Two Oceans Marine, a Cape Town shipbuilder specialising in the luxury catamaran sector. The overhead travelling cranes will be for an existing customer.

For Two Oceans Marine, the portals will be medium-duty Class 2 machines, marrying new end-carriages and customised legs to refurbished box girders and five‑ton hoists originally manufactured by Condra and repurchased from a Pretoria customer some time ago to make way for factory upgrade. They have been designed to fit an existing factory without compromising the specified lifting height of 6.5 m. Low‑profile compact hoists from Condra’s SH-series will be used to achieve this. They will feature gear reduction ratios suitably modified to allow the fiberglass catamarans to be moved efficiently but carefully, avoiding damage to their very high‑quality finish.

Delivery to Two Oceans Marine is scheduled for early September.

BB Cranes’ second shipbuilding order is expected to be confirmed soon by an existing customer. It will be for four additional double-girder overhead travelling cranes to manage the lifting requirements of a factory expansion. The company already makes extensive use of Condra cranes to build its high-end yachts. The additional four machines will be standard units with spans of 27 m and dual hoists achieving a lifting height of 6.5 m.