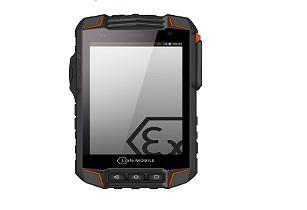 i.safe MOBILE GmbH, developer of mobile communication devices for safe use in hazardous areas, has presented IS530.1, an industrial smartphone with Android 9.0 Pie

In addition to the ATEX and IECEx standards for explosion protection, this device also enables high performance and communication requirements for use in networked industries.

It enables users to deploy it in critical environments without any difficulties. The new smartphone is ATEX and IECEx certified for zone 1/21 and can be used in potentially explosive areas.

The device is now directly available from i.safe MOBILE. The device shall be available as IS530.2 for zone 2/22 from the end of the year. Under its i.safe MOBILE brand, the company has for the first time developed a robust device for use in harsh industrial environments in non-hazardous areas. This robust version will be available under the name IS530RG.

The 13-pin, screwable connection is ergonomically placed on the right side of the device. This makes it possible to quickly and easily change the add-on peripherals outside the hazardous area. Standard intrinsically safe active headsets and passive remote speaker microphones (RSM) can be connected to the ISM interface. The amplifier for the passive RSM devices is located directly in the IS530.1. The device is rounded off with an intrinsically safe, OTG-capable USB2.0 connection.

The powerful processor (Qualcomm Snapdragon SDM660 Octa-Core), the large internal memory of 64 GB (expandable to 128 GB via microSD) and a four GB RAM combined with the current Android version 9.0 provide the basis for high working speed.