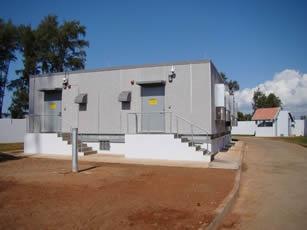 Its arrival signalled a significant development in information infrastructure on the continent. It was delivered by the Ile de Batz cable-laying vessel.
Eassy’s arrival in the country marked the start of the final phase of installation of the 10,000km high-capacity undersea cable. It will run from Mtunzini in northern KwaZulu-Natal to Port Sudan in the Red Sea to boost Internet connectivity in 21 African countries.
It will connect the 21 countries to each other and to the rest of the world, providing them with high-speed Internet and other international communications services. Eassy will have landing stations in Djibouti, Somalia, Kenya, Tanzania, Comoros and Madagascar – in addition to Mozambique, South Africa and Sudan where it has already been installed.
The project started in 2003 and is due to be up and running by August 2010.
With the capacity of 1.4 Terabytes (Tb) per second, Eassy will rival Seacom, a 600m cable that connects Africa with Europe and India and offers bandwidth speed of 1.28Tb per second. All service providers will have equal access to the cable and a uniform bandwidth price.
Eassy will ensure that Africa no longer has to rely on expensive international satellite systems for Internet connectivity and other data services. It will also service at least 10 landlocked countries in Africa. "An extensive backhaul system linking landlocked countries to the coastal countries has been developed and is in various stages of completion," according to a statement by Alphonzo Samuels, managing executive for wholesale services at Telkom – one of four South African partners in the project.
Samuels said submarine cables were more advanced than satellite systems as they have superior transmission quality and capacity, considerably fewer delays, access to the global optical fibre network, lower unit costs, no electromagnetic interference and greater resistance to adverse weather conditions.
"However, activities such as fishing and anchoring, ocean drilling, fish bites and earthquakes constitute some of the commonly known submarine cable hazards," he added.
But various measures have been put in place protect Eassy. "These include conducting ocean bed surveys to select the safest undersea routes; burying the cable in sand where possible, especially at the shallow end; avoiding heavy shipping lanes when approaching landing points; selecting safe beaches, bearing in mind that later beach erosion could expose cables; and designing the shortest land cable route for maximum security,” Samuels said.
Eassy has also been designed to last well over 25 years. “It must be emphasised, though, that in the event of submarine cable service interruptions, every attempt is always made to expedite customer services,” he said.

Boost for Telkom
Telkom is upbeat about the implications of the Eassy project, which is one of its key cable investments. It’s a significant step towards establishing a Telkom fibre-ring around Africa, the telecommunication provider said.
“Eassy further increases the robustness of Telkom’s international bandwidth offerings and portfolio. Together with other undersea cables and land-based fibre routes, Eassy creates redundant fibre access prospects into East Africa,” Samuels said.
“Redundancy means that we have duplicated equipment at the cable stations, duplicated power converters, generators … therefore, if a single piece of equipment should fail, we have another piece of equipment standing by to take its place.”
Telkom’s other cable investments are Columbus3 – providing a link to Southeast Asia, the Middle East and Western Europe; the SAT3/WASC/SAFE – connecting South Africa to West Africa and the Far East; and EIG – the Europe-India Gateway. MTN, Eassy’s largest private operator investor, said the cable’s bandwidth capacity will help it improve its services for users in South Africa, Swaziland, Namibia, Botswana, Zambia, Uganda, Rwanda and Kenya.
"MTN's capital investment of U$40.3mn [R310.5mn] in Eassy came in addition to the investments made by the company in similar ventures such as the Europe-India Gateway, SAT-3, Main-1 and the West Africa Cable System," according to a statement by Trevor Martins, MTN Eassy management committee chairperson.
"The increased bandwidth that will be available as a result of our investments in these submarine networks will capacitate both these ISPs [Internet service providers] and our mobile operations in markets largely serviced by costly satellite bandwidth, thus enabling MTN to open up large-scale access to international broadband to our valued customers," Martins said.
Other operators that have invested in Eassy include South Africa’s Neotel and Vodacom, India’s Bharti Airtel Limited, the Botswana Telecommunications Corporation, Dalkom Somalia, Zambia Telecommunications Company, Zanzibar Telecom and Uganda Telecom.

Healthy competition
Vodacom, a leading cellular network in South Africa, halved its broadband rates in early February 2010 due to "the increasing competition between undersea cable providers, which in turn creates a sustainable competitive international bandwidth market in South Africa". The reduction was made possible by the 2009 launch of the Seacom cable, which competes directly with SAT-3 and team cables in the Indian Ocean. Vodacom and all the other service providers are expected to further cut their rates when Eassy becomes operational.
“Ultimately, we believe that Eassy will go a long way towards increasing Africa’s bandwidth capacity, affordability and create increased diversity and fibre redundancy between South Africa and Europe as well as within East Africa,” Samuels said.