Smartphones and tablets are emerging as preferred gadgets for residents in the Middle East and Africa, while PC sales have suffered a sharp decline in Q3 2015 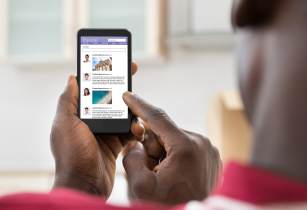 Rise of affluence and the range of options in devices have led to the increase in smartphone and tablet penetration, believe experts. (Image source: Andrey Popov/Shutterstock)

The smartphone population in the region is expected to pass 106mn this year, according to an eMarketer report. The usage of smart devices can be mapped across different sectors such as entertainment, information and utility such as apps. The affluence in the MEA is also contributing to the average resident’s purchasing muscle. In addition, the market is dominated by a range of options from key manufacturers such as Apple and Samsung.

The market, which is booming for new gadgets, is appearing to be a downer for PCs. Data published by the International Data Corporation (IDC) has stated that overall shipments declined 27.7 per cent YoY – making it the steepest decline to be recorded in a quarter.

“Most of the key inhibitors currently hampering PC demand – such as low oil prices, exchange-rate fluctuations, and uncertainty due to the ongoing war against ISIS – are also impacting consumer confidence and are expected to persist for at least the next few quarters,” said Fourad Charakla, research manager for personal computing, systems, and infrastructure solutions at IDC Middle East, Africa, and Turkey.

While smartphones and tablet usage is on the rise anyway, the IDC report also noted that refurbished PCs were also giving stiff competition to the conventional systems. Conventional PC makers are likely playing it safe and not taking into account new features and innovations that could make their product stand out – something smartphone manufacturers are taking sound advantage of.

The IDC report, however, predicts a recovery in PC sales by the end of next year and beginning of 2017. Even here, the growth is projected in areas with lower PC penetration such as Nigeria, Egypt and Pakistan to name a few, unlike strong markets such as Saudi Arabia and UAE that have made their smartphone preference quite clear.

More so, home users will continue to show their preference for smart devices, while mainly commercial users are expected to contribute to PC sales.