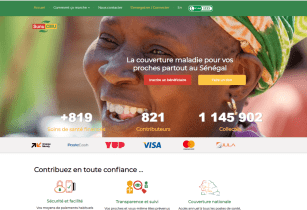 The Agency for Universal Health Coverage in Senegal has launched a new digital platform - sunucmu.com

This Senegalese digital platform has been designed and developed on a global scale by a public agency. By extending this process of democratisation to provide health access to all countries on the African continent, Senegal aims to be a leader in this field.

Digitisation has become essential at a time when digital infrastructure is developing and must be considered as a source of added value for organisations. In this regard, four years after its inception, the CMU decided to embrace the era of payment digitisation as part of its latest phase of active development.

This electronic initiative, carried out with the support of several partners, falls within the scope of the payment digitisation agenda launched in November 2018 by Mahammed Abdallah Dionne, minister of state, prime minister and secretary-general of the presidency in Senegal.

Mahammed Abdallah Dionne declared, “SUNUCMU.com main objective is to enhance the quality of life of its population; moreover, its development was entirely undertaken by national start-ups. The CMU has contributed to the birth of the IT ecosystem through these various projects.”

Mouhamed Mahi SY, the agency director of IT systems, said, “With the digital transformation of the CMU, we have set ourselves the challenge of achieving more than 75 per cent health coverage in 24 months. We were delighted with the record level of adoption during the awareness-raising sessions with mutual insurers in the region; this has demonstrated that the added value which we are striving to deliver is in tune with expectations in the field.”

This launch will be complemented by the availability of a mobile app in June. At the same time, all healthcare providers in Senegal will be geo-located, allowing all Senegalese to find the most competent specialist close to their location. In addition, biometric kits will be developed over a two-year period to cover around 3,500 service points by the end of September.