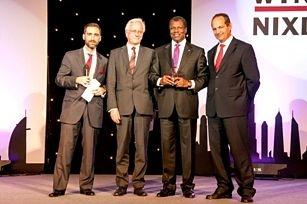 The annual summit was organised by German software company Wincor Nixdorf. Earlier this year, CWG signed an agreement with Wincor Nixdorf to help deploy 600 ATMs for banks across Nigeria. The ICT provider’s scope of work included providing support services for upgrades and communication links during the deployments.

CWG provides ATM solutions to 18 of the 21 banks in Nigeria including UBA, Ecobank, GT Bank, First City Monument Bank and Stanbic IBTC. It has deployed 3,500 Wincor Nixdorf ATMs in the country.

The company has eight offices in Nigeria and three regional offices in Uganda, Cameroon and Ghana. CWG listed its shares on the Nigerian Stock Exchange in November this year.

Wincor Nixdorf chief executive officer Eckard Heidloff said, “CWG has indeed distinguished itself both in the roll out of new technology, and in contributing significantly to our revenue growth in the region this year.”