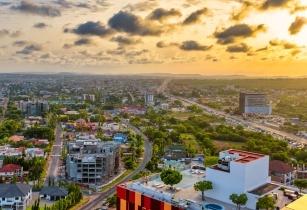 Among the African countries with the highest GDP over time, Ghana has been ranked as the eighth biggest economy in Africa, according to the World Bank’s report

The report was focused on the GDP growth of African countries in 2020 where Ghana is placed on eight in Africa and Nigeria on first positions, respectively. Ghana’s economic growth can be largely attributed to oil production in the last 15 years. With an economic size of US$72.4bn, Ghana has seen a consistent expansion in its economy.

“While the five highest spots on this ranking have been more or less constant over the last three decades, the rest of the top eight are subject to bigger fluctuations as our chart shows. For example, Libya managed to come in sixth in 1990 and 2005 but dropped out of the top eight and only made the 17th rank in 2020," the World Bank noted.

Ghana was one of the few African countries that witnessed a marginal growth of 0.4% last year after the global economy was battered by COVID-19. It’s expected to grow by 4.8% in 2021 and an average of 5% for the next four years, after a swift recovery in the hotels and restaurants (hospitality) as well as manufacturing sub-sectors and a boost in exports.

In 2020, Nigeria was termed as the biggest economy on the African continent with a total GDP of US$432.3bn, followed by Egypt and South Africa, respectively.