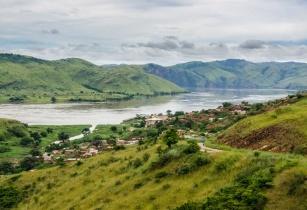 Welcoming the newcomer to the EAC, President Kenyatta termed the admission of the DRC into the EAC a historic event that demonstrates the agility of the community to expand beyond its socio-cultural boundaries to new people and trade centred partnerships and collaboration that will expand opportunities for citizens of the region.

“Today as chairman of the EAC, I proudly and warmly welcome our brothers and sisters from the DRC to the EAC and look forward to joining hands in strengthening our community together. Working together, we have more to gain than when we are separate. Indeed, the combined population and GDP of our community will grow by 50% and 25% respectively, implying a corresponding expansion of the market for goods and services. These numbers imply expanded market opportunities for producers located within EAC under the Customs Union,” President Kenyatta said.

The President added that the expanded community will attract more investments across all sectors, a move that will create more wealth and employment for the people. With a larger market of about 300 million people, President Kenyatta expressed optimism that the community will achieve better outcomes brought about by the economies of scale and pooling of productive human and financial resources.

Speaking during the summit, other East African leaders commended President Felix Tshisekedi of the DRC for working hard to ensure his country joined the community noting that the action he took is not only beneficial to his country but the region at large.

Leaders who included Presidents Yoweri Kaguta Museveni (Uganda), Paul Kagame (Rwanda) and Samia Suluhu (Tanzania) thanked the EAC council of ministers and the secretariat for speeding up the process that led to the admission of the DRC into the community.

“The joining of East Africa Community by DRC is an event of great significance. I have been involved in these efforts for almost 60 years and this is really very pleasant that the DRC has finally reconnected formally with EAC,” said President Museveni.

Tanzanian President Samia Suluhu said the decision by President Tshisekedi to seek admission for his country into the EAC will provide an opportunity to entrench peace and security in the DRC. In his inaugural speech at the EAC summit, President Tshisekedi thanked the EAC leaders for welcoming him to the community and assured of his commitment to working closely with them for the development and prosperity of the region.