The Dangote Group has planned an advanced refinery project in Nigeria, with an aim to reduce the West African country’s reliance on imported energy and bring with it more than 30,000 jobs 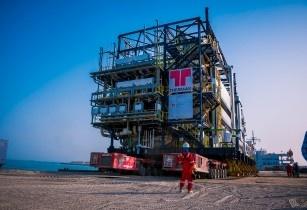 The new refinery is the most ambitious peroject of its kind in Africa. (Image source: Dangote Group)

To support the drive for growth, Africa is looking to reduce reliance on imports; producing more of its own energy and raw materials. In Nigeria, this drive is led by businesses such as the Dangote Group of companies, which is putting the finishing touches on the continent’s largest oil refinery in Lekki Free Zone, Lagos State.

This development has been on a truly epic scale. The journey from Dangote’s new, purpose-built jetty to the construction site was more of a commute than a transportation; covering around 10km. More than 52,000t of components were planned for construction – including a 2,000t crude column that is the largest ever fabricated, and the heaviest item ever transported on public roads in Africa: a 3,000t regenerator.

The demands here were not simply to move such exceptional dimensions and weights but also to ensure all components were coordinated to arrive in the desired sequence – minimising the risk of delays and additional costs.

Giuseppe Surace, chief operations officer at Dangote Refinery, explained, “Our new refinery is the most ambitious project of its kind ever seen in Africa. Given the scale and importance of the work involved, we knew that we needed an experienced engineered heavy logistics partner who could successfully overcome challenges in the site terrain as well as the volume and size of construction components.

Once fully operational later in 2021, the refinery will process 650,000 barrels of crude oil per day. It will transform the local economy, creating thousands of jobs and helping to secure a more prosperous future for African industry.

A project of this scale demands a high degree of flexibility in when and how items are needed to be transported to the site and installed, which is where Mammoet’s large global network of equipment and expertise became invaluable.

The team deserves significant credit, having operated under some of the most challenging circumstances to make the project succeed. For example, when the coronavirus pandemic arrived, they found new ways to keep productivity high while making sure everyone stayed safe.”