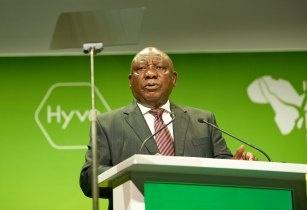 The president noted that the conference was taking place at an important moment as almost every industry across the globe is having to adapt to new circumstances, confront new challenges and be prepared to seize new opportunities as Covid-19 restrictions ease. The mining industry in Africa is no different but has continued to show its resiliency over the last few years of disruption.

“In South Africa, mining registered growth of 11.8% in 2021, the highest across all industries. Last year the sector recovered production to almost pre-Covid levels. After more than 150 years, mining remains a critical pillar of our economy. It is a significant contributor to export earning, it is an important source of foreign direct investment, and directly employs nearly half a million people.

“We expect mining’s significance and contribution to our economy to grow.”

Despite this, the president noted that the country has fallen into the bottom ten of the Fraser Institute’s Investment Attractiveness Index rankings to its lowest ever ratings  ̶ a problem that could inhibit mining expansion.

To fix this, he stressed the need to fix the regulatory and administrative problems; clear the backlog of mining and prospecting rights and mineral rights transfer applications; put in place a modern and efficient cadastral system; implement an effective exploration strategy; improve the functioning of railways and ports; and ensure a secure and reliable supply of affordable electricity.

“These tasks are at the forefront of our economic reconstruction and recovery efforts,” the president remarked. He added that they have made significant headway in these efforts such as driving a programme of policy reform for the network industries; amending regulations to allow companies to invest in new generation capacity of up to 100MW without needing to apply for a license; and strengthening the capacity of security services and law enforcement agencies to tackle illegal mining, cable theft and general damage to infrastructure.

“We are committed to mobilising the necessary resources and providing the necessary incentives for a new wave of exploration, particularly of the minerals required for the global energy transition.”

Continuing, the president revealed his palpable pleasure at being present at the launch of the world’s largest hydrogen-powered mine haul truck by Anglo American. This has been designed to operate in everyday mining conditions at the Mogalakwena PGMs mine in South Africa.

“We are keen to harness the opportunities of the hydrogen economy. We aim to be not only an important hub for the production and export of green hydrogen, but also of green ammonia, green iron and steel, and sustainable aviation jet fuel.”