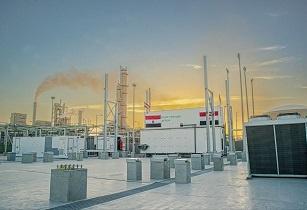 Egypt Green, a green hydrogen plant located in Ain Sokhna, Egypt, which is owned, built, and operated by Fertiglobe, Scatec ASA, Orascom Construction and The Sovereign Fund of Egypt, has reached a significant milestone in its delivery with the commissioning of the first phase

The announcement was made during COP27 as world leaders seek to accelerate global climate action through emissions reduction.

Ain Sokhna has a strategic position close to the Suez Canal Economic Zone with the possibility of using renewable electricity to develop an industrial hub near global shipping lanes.

Fertiglobe has a strong global network through its shareholders, OCI N.V. and ADNOC, and is an early mover in hydrogen and low-carbon ammonia. The hydrogen tie-ins for up to 100 MW of electrolysis have already been installed at Fertiglobe’s two existing ammonia plants in Ain Sokhna.

Terje Pilskog, CEO of Scatec, said, “Today marks a key milestone for Scatec, but more importantly, it represents a breakthrough for green hydrogen production in a strategically situated region… We see a massive green hydrogen demand driven by strong policy support globally, and Africa is perfectly positioned to take advantage of its low-cost renewables and strategic position.”

The facility will deliver up to approximately 15,000 tons of green hydrogen as feedstock for production of up to 90,000 of green ammonia per year in Fertiglobe’s existing ammonia plants. The consortium is in the process of finalising engineering and technology choices for the plant and the partners aim to reach final investment decision on the facility in 2023.

Nassef Sawiris, executive chair of OCI N.V. and executive vice chair of Fertiglobe, commented, “We are pleased with the launch of the first tangible project of its kind and the first integrated green hydrogen plant in Africa. It is a true milestone that puts Egypt and Africa firmly on the map as one of the best places in the world to develop a green hydrogen hub, thanks to available land, abundant renewable energy sources, the significant pool of skilled labour, and our location on global cross-roads.”