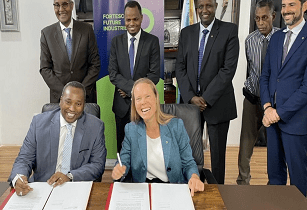 The framework agreement was signed between FFI and the Government of the Republic of Djibouti. (Image source: FFI)

The framework agreement is a major step towards the country’s first ever production of green hydrogen and could position Djibouti as a future leader in renewable energy production.

Yonis Ali Guedi, Djibouti’s Minister of Energy and Natural Resources, commented, “Djibouti does not want to miss this historic moment when green hydrogen becomes the fuel for energy transition. This project has the potential for significant socio-economic impact, in terms of job creation.”

The deal provides FFI access and rights to study the possibilities of renewable energy resources in Djibouti which include solar, wind and geothermal sites, as well as subsurface gas storage areas and industrial areas.

Julie Shuttleworth, CEO of FFI, said, “This partnership with the Government of the Republic of Djibouti is a great step towards lowering emissions and driving green energy projects forward. Djibouti’s solar, wind and geothermal sites as well as its access to port, makes it an attractive location for the production of green hydrogen.”

Depending on the outcome of FFI’s studies, the parties may then negotiate the terms on an investment agreement to develop and construct green hydrogen production facilities on that land.