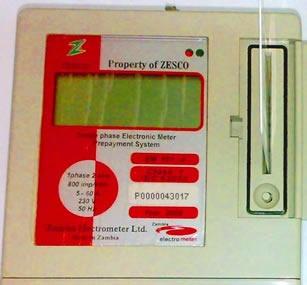 The demand for electricity in Zambia is projected to go beyond 2,000 megawatts before end-2011.

During the same period the projected installed capacity would slightly shift to above 2,500 megawatts due to increased demand from the mining sector, industries and domestic consumers.
The mining sector consumes between 50 and 60 per cent of the electricity produced by the Zambia Electricity Supply Corporation (ZESCO). This sector is growing at a faster rate after government placed the mines in the hands of foreign investors and due to increased demand for copper, cobalt and other base metals in China. At the time the mines were state-owned, copper production in 1997 was 263,000 tonnes but this shot up to 575,000 tonnes in 2008 after the mines were placed in the hands of foreign investors. Copper production is projected to go beyond one million tonnes in a few years’ time.
This means that ZESCO has to increase its generation capacity in order to avoid load shedding which severely affected domestic consumers between 2006 and 2008. In the short term, some power stations have been up rated and now the installed capacity is slightly below 2,000 megawatts. Zambia, with about 40 per cent of the water in the SADC region, intends to add more than 1,000 megawatts of power to its current installed capacity. Additional wattage means developing Kafue Gorge Lower (750 megawatts), Kariba North Bank Power Extension (360 megawatts) and Itezhi Tezhi (120 megawatts).
The projected capital requirement to develop these large-scale power stations and the associated infrastructure such as transmission lines is about US $ 2bn.. Even if Zambia were to secure this colossal sum of money from foreign financiers through Public Private Partnerships, these projects would not be completed and commissioned in a short period of time.
Kafue Gorge Lower, with the capital requirement of about US 1.5bn and with the largest potential of 750 megawatts, is expected to be completed in 2014. Meanwhile, works at Kariba North Bank Power Extension are underway, but Ministry of Finance and National Planning says they would not be completed until 2014. Under these circumstances, Zambia needs to employ strategies of reducing the load on the available wattage. One strategy that has been sought is installation of pre-payment electrometers for domestic consumers. These metres, which are replacing the mechanical ones, would not only help to conserve power, but also reduce ZESCO’s operating costs and improve the state-run company’s revenue collection.

Looking to future capacity
In the past, consumers would use electricity and then receive bills from ZESCO. They would not control their consumption and the electricity company would spend a lot of money to recover debt, on top of labour costs from metre readers who collected data. With the electrometer system, data would be captured centrally by computers at the Points of Sale (PoS) run by ZESCO or its agents. The data is obtained by two-way smart cards that are embedded in the electrometers. These computers connected to the Internet are used to update customers’ credit and to recover old debts. In 2007 ZESCO entered into a joint venture with EL Sewedy electrometer of Egypt to produce electrometers in the industrial area of Ndola, the provincial headquarters of the Copperbelt. The Egyptian metre company has a 60 per cent share in the joint venture while the remaining 40 per cent has been reserved for ZESCO. The Ndola plant has acquired the state-of- the-art equipment to assemble, programme, calibrate and test metres whose components are procured from Egypt.
The plant has the capacity to produce 200,000 metres per annum. These metres are of high quality, having attained the ISO 9001-2000 certification by SGS of the United Kingdom. “The EM pre-payment system was developed after extensive research to meet various electricity utilities’ demands employing the latest technologies of the two-way smart cards,” says Boyd Longwe, the marketing manager for Zambia electrometer.
With the electrometers, ZESCO would not require the services of metre readers. This would reduce the company’s labour costs and achieve accuracy in terms of data collection. Since mechanical metres that were used previously had to be read by the metre readers, this system was prone to errors. And if customers failed to settle electricity bills, ZESCO employees would drive to residential areas to disconnect their systems. They would again travel to the same points to re-connect the customers after they settled the debts and paid re-connection fees.
A report that has been compiled by Energy Regulation Board (ERB) had this to say on ZESCO’s operating costs: “In the financial year ended March 31, 2007, labour costs were the biggest component of costs which contributed 49 per cent to total operating costs. The proportion of labour costs to the total budget was way beyond acceptable international levels which is about 30 per cent. In that regard adjustments were made to projected labour costs’ contribution to total operating costs to 40 per cent for 2008, 35 per cent for 2009 and 30 per cent for 2010…”
The energy sector has not attracted foreign investments because the tariffs are not cost-reflective. At least this has been the conclusion by the UK’s Department for International Development (DfID) and other international agencies. Now that ZESCO is using the electrometers, operating costs would go down and electricity sector might attract investors. This would be by buttressed by the enacted Public Private Partnership legal framework to develop infrastructure such as large-scale hydro-power stations, which are capital intensive.
Currently, ZESCO other costs come from diesel generators that have been placed in rural areas. Power generated by diesel generators is not cost-reflective and this cost can be reduced by the use of Information Communications Technologies (ICTs) such as the installation of electrometers in urban areas. While ZESCO’s operating and labour costs would be reduced by the use of electrometers, some customers say they incur high transport costs to buy electricity units from a few places, including the centrally company’s PoS. They have suggested that ZESCO should appoint agents to supply electricity units, especially in high density areas where electrometers have been installed.