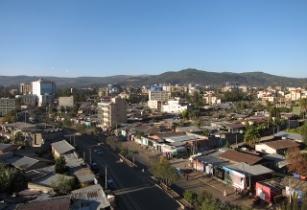 The CEO of Huajian Group, a Chinese shoe manufacturer that produces for the Trump's shoe brand Zhang Huarong said the firm is in the process of designing a ‘light industrial city’ complete with production facilities, dorms, and its own hospital in Addis Ababa.

Ivanka Trump and her father Donald Trump, who has promised to bring manufacturing back to the US have been on the spotlight for selling products made abroad. The show company has supplied around 100,000 pairs to Ivanka Trump collection.

Robert Larence, a Harvard professor of trade and investment who surveyed shoes, scarves and purses said that more than 600 of the 838 products he looked at had been imported and half of the imported goods came from China.

Ethiopia is quickly becoming Africa’s biggest hub of textile manufacturing. Companies such as H&M and Primark have started sourcing apparel from Ethiopia, taking advantage of cheaper production costs and the government’s investment in industrial zone.

Donald Trump has suggested measures such as imposing a 45 per cent tariff on goods made in China under the recently renewed African Growth and Opportunity Act (AGOA).