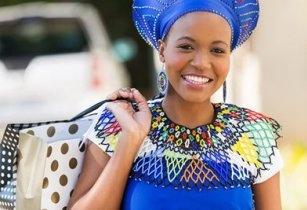 They spoke ahead of World Fashion Day, a day marked yearly on 21 August to celebrate and commemorate the glory, spirit, and art of fashion throughout the world, and to highlight national, regional and international achievements in the fashion world over the past year.

Through Fashionomics Africa, the African Development Bank (AfDB) aims to support the growth of the African textile and fashion sectors through a focus on building the capacities of micro, small and medium-sized enterprises (MSMEs) in the textile and clothing sector, especially for women and youth.

“This is a platform through which we are able to actually tap into manufacturers, into creatives, other designers that we would like to collaborate with, or even just merely fabric manufacturers that could actually assist us in the growth of our brands. Currently Fashionomics Africa has linked us to a USA-based company that will assist us in selling our luxury products online. We are ever grateful for this introduction,” said Shaldon Kopman, Designer and Creative Director of Naked Ape, a South Africa-based fashion label.

The stakeholders highlighted how AfDB has taken the lead in promoting investments in textile and fashion sector, increasing access to finance for entrepreneurs and incubating and accelerating start-ups.

“Fashionomics Africa is the only platform that takes into consideration African designers and therefore understands their economic impact on the continent. What an amazing feeling to know that we, African designers, count,” said Senegalese Designer Safiétou Seck.

Seck, who owns the brand ‘SARAYAA’ (a multi-ethnic, high-end clothing brand for women), stressed how the platform has helped to expand her network and gave her further exposure and awareness.

She called on African governments to recognize the continent’s competitive and comparative advantage with the creative industries and highlighted how this could be transformed into economic benefit.

The two-day event was hosted by the Inter-American Development Bank (IADB) in Washington, DC, on July 13-14, and aimed to leverage the potential of the cultural and creative economy

Fashionomics Africa (the economics of fashion) is an initiative of the AfDB to increase Africa’s participation in the global textile industry supply chain.

In addition to using its traditional public- and private-sector financing instruments to support the growth of the textile and fashion industry, the AfDB is developing the innovative and technology-driven Fashionomics Africa platform, an online interactive marketplace for medium and small scale enterprises (MSMEs) and relevant stakeholders in the textile and fashion sectors in Africa. The goal is to enable young African textile and fashion entrepreneurs to create and grow their businesses.

“Africa should be exporting finished textile products, such as clothes, suits, dresses, shirts; not cotton lint,” said Akinwumi Adesina, President of the AfDB.

Africa produces up to 6% of the world’s cotton, but the continent has very few textile factories and, due to poor industrialization, much of the fabric is imported from Asia.