Made easy with light 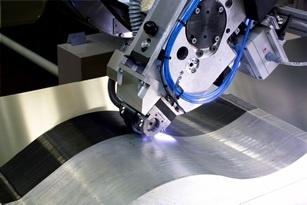 Lightweight, sturdy, and non-corrosive: fiber-reinforced thermoplastics are an ideal material for making boats and cars, and for aerospace engineering.

But up to now, processing the raw materials was considered laborious and costly. Fraunhofer researchers have shown how lasers can make the manufacturing of structures out of fiber-reinforced thermoplastics efficient, clean, reliable and automatic.
The lighter, the better. Mountains are easier to conquer with mountain bikes that weigh less. Cars with less weight bearing down on the axles save on gas. Design engineers are doing their best to whittle down airplanes, satellites and wind turbines, too, gram by gram. Fiber-reinforced thermoplastics are ideal for use in sporting equipment – and in the automotive industry, as well as in aerospace. They are fifty to seventy percent lighter than steel and fifteen to twenty percent lighter than aluminum; their stability and breaking strength are impressive. Yet until now, processing these materials was considered complicated and cost-intensive: Manufacturers of boat hulls, aircraft components and rotary blades had to work with expensive forming tools that were lined with glass or carbon fiber matting. In the second process step, a pump siphoned off the air before fluid resin could saturate the matting – the vacuum prevented the accumulation of air bubbles on the fibers, which impede stability. Then, to harden the material, a gigantic oven is needed – an oven big enough to accommodate the components. And ultimately, the parts still had to be glued together. Thankfully, this whole process will soon get easier: In Paris, Fraunhofer researchers will demonstrate how fiber-reinforced composites can be crafted and then bonded with lasers – with no need to bother with matting and resins.

Components made of strips
To facilitate the fully-automated production of components out of fiber-reinforced thermoplastics, engineers and scientists at the Fraunhofer Institute for Production Technology IPT devised an entirely new process. The ingredients for tape placement come from the roll: Carbon fibers are integrated into kilometer-long strips of meltable thermoplastic resin. Despite their negligible weight, these strips have above-average resilience; in this regard, engineers measure and evaluate the impact and tensile strength and tear resistance. To assemble sturdy components from these tapes, multiple laminat layers are stacked on top of each other – by the laser just before being laid down – and then compressed into a compact structure. This way, the tape strips fuse with each other and cool off quickly, too, because the laser rapidly emits precisely measured doses of energy in a targeted manner onto the material. This minimizes the expenditure of energy and time. Compared to prior manufacturing processes – for instance, joining tapes with hot air – the quality is even better. By now already, industry demand for the new process is strong.
Eaven though the process is still in the prototype phase.

Creating bonds with lasers
Using laser beams, engineers can even glue components together: At the JEC in Paris, Fraunhofer researchers will present a new joining technology for glass- fiber-reinforced thermoplastics. "All we need for this is a laser that emits infrared light," explains Wolfgang Knapp of the Fraunhofer Institute for Laser Technology ILT. "The infrared laser melts the surface of the plastic components. If you compress them when they are still fluid and then let them harden, then the result is an extraordinarily stable bond."
Difficult-to-form, bulky components of fiber-reinforced plastic can be joined together in a manner sturdy enough to satisfy the demanding standards enforced by the automotive, aviation and aerospace industries. "The materials must withstand immense acceleration, vibrations and temperature differences, so a 200-percent level of safety is required," explains Knapp. In conjunction with his colleagues, he optimized the laser joining process: "The know-how sticks in the process control: in determining the gap between laser head and surface; in controlling the time which the laser beam lingers on substrate; in calibrating the pressure." The magic of the technology is in its versatility. With the infrared laser, any components made of thermoplastic composites can be welded together – airplane fuselages, load-bearing structures for cars, components of boat hulls, rocket tanks.

Materials for the extreme case
The possible uses of laser beams in the production and processing of fiber-reinforced thermoplastics are absolutely limitless: "The new joining techniques are suitable for all thermoplastic materials that are subjected to extreme strains," concludes Knapp, who is coordinating the Fraunhofer joint exhibition booth. "Because fiber composites are not only stable, they are also lightweight and they save energy with any type of acceleration – no matter if by land, sea, in the air or in space."