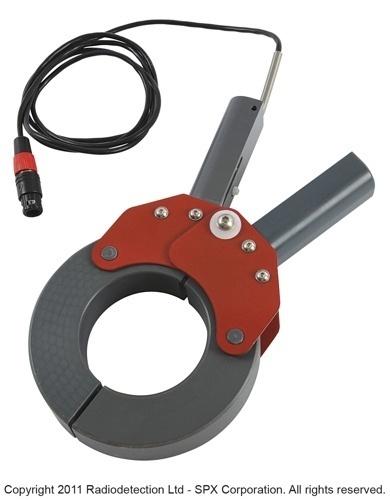 The CD transmitter clamp is used to induce the CD signal onto the target utility when direct connection isn't possible, convenient or permitted. Users can also use this clamp to induce low frequency signals onto cables for 'ordinary' location work.

Once a CD signal has been applied to a target line, an operator can use the CD Stethoscope to identify it amongst a number of parallel or bunched utilities, simply by applying the stethoscope to each in turn. The stethoscope and the RD8000PDL visually alerts the operator when it is on to the target line.

The versatile 'CD/CM' clamp provides the targeting capability of the CD stethoscope, but adds further functionality; When clamped around a pipe or cable, the CD/CM clamp will measure the current induced on it by the TX-10 transmitter, displaying the readout on the screen of the RD8000PDL Pipe & Cable Locator, and enabling the operator to identify the cable of interest and also to diagnose spurs or areas of concern on the target cable.